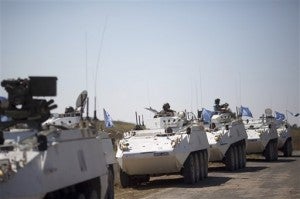 CAGAYAN DE ORO CITY, Philippines — The incoming commander of the military’s Southern Luzon Command said Tuesday the Filipino peacekeepers in the Golan Heights were correct in defying Major General Iqbal Singh Singha of the UN Disengagement Observer Force (Undof) by not turning over their firearms to Syrian rebels.

“If I were the commander of the Filipino contingent of the United Nations Peacekeeping Force in the Golan Heights, I would have done the same — not surrender to Syrian rebels,” said Major General Ricardo Visaya, outgoing commander of the Army’s 4th Infantry Division here.

Visaya, who is to replace Lieutenant General Cesar Ronnie Ordoyo, who will retire this month, as Solcom commander, said the term surrender was not in the vocabulary of the Armed Forces of the Philippines.

“We do not surrender to our enemies,” he said.

Visaya joined other Filipino generals in calling for an investigation of Singha, saying his surrender order was uncalled for.

“The Undof commander should be properly investigated because he should have ordered a reinforcement instead,” Visaya added.

He said what the Filipino soldiers in the Golan Heights did was heroic and an act of bravery.

“Your presence there is useless if you don’t fight and just surrender,” Visaya said.

Meanwhile, Visaya said he will formally relinquish his post as 4th ID commander to Major General Oscar Lactao on September 10.

DFA in talks with UN on surrender controversy