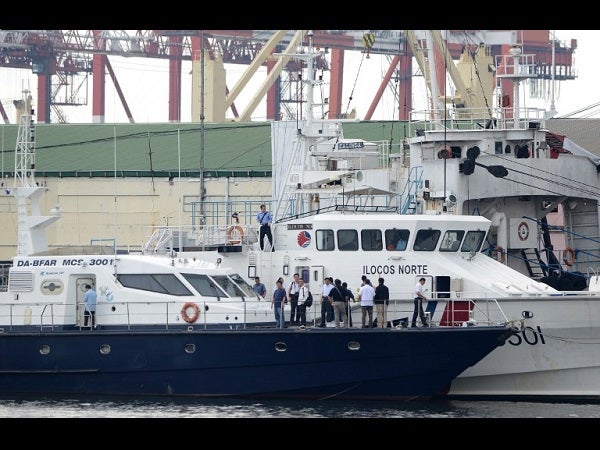 Taiwan government experts along with National Bureau of Investigation personnel are onboard the Philippine Coast Guard’s (PCG) patrol boat Maritime Control Surveillance 3001, the patrol boat used by PCG when the fatal shooting of a Taiwanese fisherman happened, docked at a pier in Manila on May 28, 2013. AFP FILE PHOTO

MANILA, Philippines — The trial of the Philippine Coast Guard (PCG) men accused in the shooting death of Taiwanese fisherman Hong Shi Cheng at the Balintang Channel in 2013 has started as the Batanes Regional Trial Court junked their bid to dismiss the charges.

This paved the way for the prosecution to begin presenting its case, with the state set to call Hong’s son as its first witness on November 25, said Navera, head of the prosecution panel.

Only one of the accused, Seaman 1st Class Endrando Aguila, has not been arraigned as he was absent in Tuesday’s proceedings because of a family matter, Navera said. He is expected to be arraigned when the trial resumes.

Coast Guard Commanding Officer Arnold dela Cruz was arraigned on July 7. The accused all made bail earlier but are under the administrative custody of the PCG.

“The court denied the motion to quash and agreed with our arguments. They were immediately arraigned and they all entered a not guilty plea,” Navera said by phone from Batanes.

The accused, except for Cruz, filed the motion last week, contending that the prosecution could not prove that Hong had died when PCG men fired at his vessel caught in Philippine waters off Batanes on May 9, 2013.

The prosecution panel opposed the move Monday, showing the court Hong’s death certificate and the autopsy report from Taiwan.

Hong’s shooting fractured relations between Manila and Taiwan last year, with the latter warning of various sanctions against the Philippines if it failed to bring the case to justice. President Benigno Aquino apologized to the fisherman’s family amid the backlash.