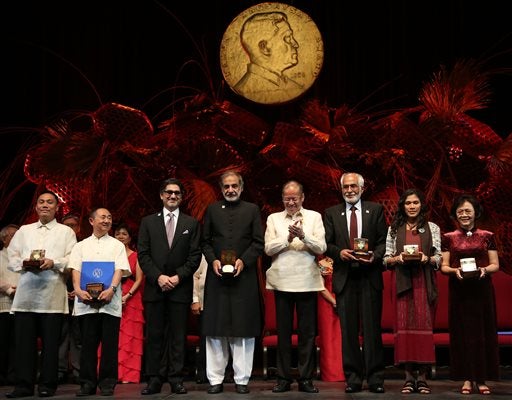 MANILA, Philippines – What sets Ramon Magsaysay Awardees apart from other people is that they chose to act on issues that plague society unlike those who choose only to complain, President Benigno Aquino III said Sunday.

Speaking before a thousand government and private sector leaders, media and students, Aquino lauded this year’s awardees of what is said to be Asia’s version of the Nobel Prize.

“Each of these individuals has confronted, at times, long standing problems or their latest permutations, and found innovative and inclusive ways to address them,” Aquino said of the men and women who received their Ramon Magsaysay Award at the Cultural Center of the Philippines (CCP) in Manila.

“In other words, they have not been content to complain, but have been inspired to act, with solutions that are relevant and replicable,” he added. “I am hopeful that the honor they receive today will serve as a challenge to all of us—reminding us that, in our respective fields of expertise, we each have the capacity to help those who have less.”

Acting on problems instead of just complaining has been a recurring theme in the President’s recent speeches, especially as his ratings slide down as he nears the end of his term in 2016.

Aquino has called on the people to contribute to the development of the country, like many others, instead of sowing discord by peddling lies. During his speech on National Heroes Day, he even warned the public against “fake reformists.”

Among the 2014 Ramon Magsaysay Awardees were Hu Shuli of China, Saur Marlina Manurung of Indonesia, Omara Khan Masoudi of Afghanistan, Wang Canfa of China, and The Citizens Foundation. The sixth awardee, Filipino teacher Randy Halasan was recognized for Emergent Leadership, a category for outstanding individuals 40 years old and below.

Aquino said that because the award recognizes those who have dedicated their lives to serving the marginalized, one can always rely on the awardees to bring hope.

“Truly, whenever one feels overcome by cynicism, one can count on the Magsaysay Awards to point towards hope—towards stories of individuals who, confronted by the darkness of despair, have chosen to serve as beacons of light,” he said.

The President, who was among those who gave out the awards on Sunday night, lauded Halasan and Manurung for working hard to educate indigenous communities not only literacy but also practical life skills.

“Together with the example of the Citizens Foundation, based in Pakistan, which has been focused on education for all, regardless of religion, gender, or economic status, these prove that learning must go beyond entrenched methods and curricula; it is one of the most critical pathways to self-value and empowerment, and we must treat it as such,” he said.

“In President Ramon Magsaysay’s day, the challenge was how democracy could strengthen newly independent nations in the face of tyranny and totalitarianism. Today’s challenges, on the other hand, ask us how we can harness democracy to make sure that our progress is felt by every last citizen, especially by those who are most vulnerable,” he said.