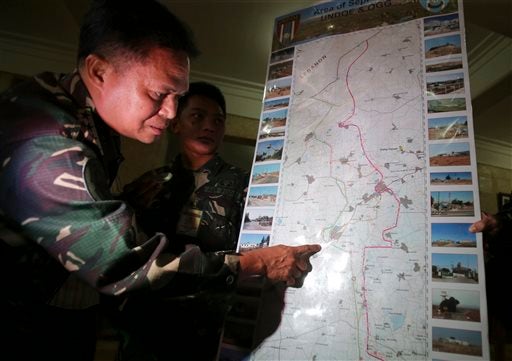 MANILA, Philippines — Under the cover of darkness, Filipino peacekeepers locked in a firefight with Syrian rebels in Golan Heights escaped at around Sunday midnight Syrian time (around 5 am Philippine time), ending a three-day standoff.

The top brass of the Armed Forces of the Philippines called it “the greatest escape,” with all 75 soldiers serving under the United Nations Disengagement Observer Force unharmed.

The daring feat happened while the 100 Syrian rebels – who surrounded the Filipino troops’ encampments at Position 68 and 69 in Golan Heights – were sleeping.

“We commend our soldiers for exhibiting resolve even while under heavy fire. This manifests their determination to fulfill our commitment to the community of nations,” the official stressed.

“They left at around midnight and reached safety at around 1:40 a.m., bringing with them our firearms,” the official said in an interview.

The 75 peacekeepers from the two encampments were from the 80th Infantry Battalion, who had undergone training for their peacekeeping mission.

On Saturday at around 6 a.m. Syrian time (11 a.m. Philippine time), around 100 rebels attacked Position 68 where the 40 Filipino soldiers were valiantly holding their ground, leading to a seven-hour firefight.

“Our troops defended their position. The Syrian rebels attacked on-board pick-up trucks. Our peacekeepers returned fire in self-defense. Our troops fought back bravely and successfully held their positions,” Catapang said.

The attack prompted the UNDOF to reposition the Filipino troops to a more secure position within the mission area, he added.

Later on Saturday, the first group of 35 peacekeepers from Position 69 managed to leave their encampment with Irish peacekeepers securing their escape route.

The cold temperatures at night worked to the peacekeepers’ advantage as they observed the rebels hiding in houses at night to sleep, unable to bear the cold.

“They observed that for the first night. So for the second night, they slipped out with their firearms and walked to safety,” the official said.

The AFP said the soldiers had enough ammunition to defend themselves from attack while escaping, which fortunately did not happen.

The Filipino peacekeepers from Positions 68 and 69 are now repositioned at Camp Ziuoani, according to authorities.

The standoff began after Syrian rebels on Thursday took 44 Fijian peacekeepers hostage, surrounding the two encampments of Filipino peacekeepers. The rebels demanded the Filipino soldiers’ firearms but they refused, leading to the standoff.

The firefight began on Saturday morning when the Syrian rebels attacked Position 68.

The standoff prompted the UNDOF to move 58 Filipino peacekeepers from Position 60 to Camp Faoar on Friday.

Catapang thanked the governments of Israel and Syria for “supporting our troops to uphold the integrity of the area of separation and to deescalate the situation.”

The AFP also recognized the role of the United States and Qatar governments in the negotiations for the safety of the Filipino peacekeepers.

“The teamwork demonstrated by our fellow UNDOF troop-contributing countries and the UN is exemplary,” Catapang said.

Zagala has reiterated President Aquino’s previous order that the Filipino peacekeepers will finish their tour of duty by October, after which they will be repatriated.

The President earlier ordered the pullout of Filipino peacekeepers from Golan Heights, citing the escalating conflict between Syrian rebels and the Syrian government. Also to be pulled out are troops in Liberia because of the Ebola virus outbreak.

Meanwhile, Catapang said the AFP and the UN “will not compromise the safety and security of our troops while in the pursuit of their duties.”

“It is in our national interest to prioritize their safety without abandoning our commitment to international security,” the AFP chief added.