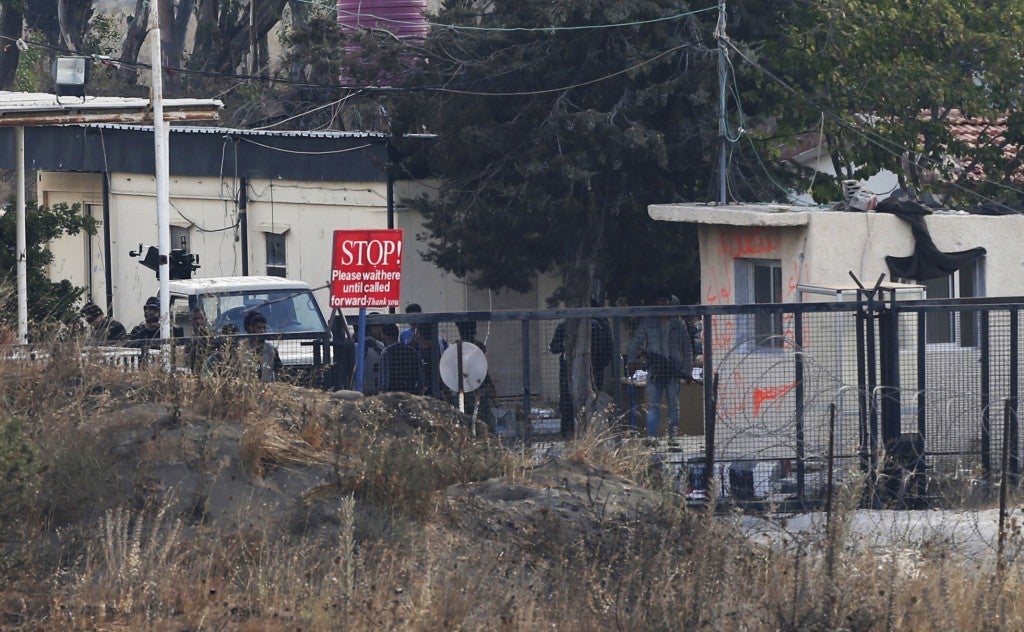 An armed group of men, not specified which group of rebels, gather at Syria’s Quneitra border crossing between Syria and the Israeli-controlled Golan Heights, Friday, Aug. 29, 2014. It was unclear if the men were connected to an armed group that, the United Nations said, detained more than 40 U.N. peacekeepers during fighting in Syria early Thursday. The peacekeepers were detained on the Syrian side of the Golan Heights during a “period of increased fighting between armed elements and the Syrian Arab Armed Forces,” the office of U.N. Secretary-General Ban Ki-moon said in a statement. ( AP Photo/Ariel Schalit)

MANILA, Philippines—Irish peacekeepers have rescued Filipino peacekeepers in Golan Heights, according to an Irish publication.

The Irish forces serving in the United Nations Disengagement Observer Force “managed to save the peacekeepers from a massacre by securing an escape route for the Filipinos near the Israeli-Syrian border,” said Irish Mirror in a story posted on Aug. 29, at 10:14 pm (around 5 am Manila time).

It has yet to be confirmed where these troops came from. There were 75 Filipino peacekeepers trapped at Positions 68 and 69 around that time.

On Friday afternoon (around 5 pm Manila time), the UN moved 58 troops to the UN Battalion Headquarters in Camp Faouar.

On Saturday morning (6 am Syrian time/11 am PH time), the rebels attacked a Filipino-manned position. Those in Position 69 were already extricated, the report said.

“Our brave soldiers managed to save the peacekeepers from a massacre by securing an escape route for the Filipinos near the Israeli-Syrian border,” the report said.

The same report quoted a spokesperson of Irish Defense Forces as saying that Irish personnel secured a route, provided security as Undof troops withdrew from a UN position and escorted them to the Force Headquarters in Camp Faouar.

On Thursday, Syrian rebels abducted Fijian peacekeepers after asking them to surrender their firearms to which they obliged.

They tried to do the same with Filipino peacekeepers but they resisted. There was a stand-off before the attack.

Read Next
Aquino kept abreast of PH peacekeepers’ situation
EDITORS' PICK
Smart poised to turn PH into ‘Smart 5G country’ with nationwide rollout
Water remains our saving grace right now
Get 80% OFF Ignite 2020 Cyber Tickets starting 28 September
House to probe Facebook takedown of gov’t accounts
Feud is over: Velasco next Speaker on Oct. 14
Duterte meets with Cayetano, Velasco amid speakership issue
MOST READ
Velasco to take over as Speaker on Oct. 14
‘I offered to resign’ because of endless corruption, says Duterte
Duterte will ask Congress to abolish PhilHealth
LOOK: The Mountain from ‘Game of Thrones’ welcomes first son with wife
Don't miss out on the latest news and information.