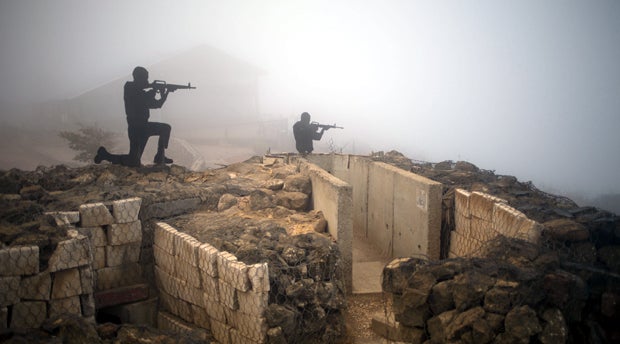 Metal boards in the shape of gunmen sit on an old bunker at an observation point on Mt. Bental in the Israeli controlled Golan Heights, overlooking the border with Syria near the Quneitra province, Friday, Aug. 29, 2014. AP

Lieutenant Colonel Ramon Zagala, Armed Forces of the Philippines public affairs chief, said there have been no reported casualties.

“Although may firefight, safe ang tropa natin [Although there is a firefight, our troops are safe],” Zagala told reporters at the press office in Camp Aguinaldo.

The military was supposed to hold a press briefing on the developments in Golan Heights, but Zagala said the event was postponed to a later time.

“We are now focused on the safety and security of our troops,” Zagala said, adding that Gazmin, Catapang, and other military officials are discussing plans in a conference.

Seventy-five Filipino peacekeepers had been in a standoff with Syrian rebels at Positions 68 and 69 since Thursday, after the rebels took 43 Fijian peacekeepers hostage.

Position 69 has 35 Filipino peacekeepers while Position 68 has 40, according to the AFP.

On Friday, 58 other Filipino troops in Position 60 were brought to the United Nations Disengagement Observer Force headquarters in Camp Faouar, as per orders from the UNDOF for them to be “consolidated,” the military said.

A separate source privy to the monitoring of the situation, said the attack was done in Positions 68 and 69 by the rebels 6 a.m. Syrian time.

There have been Filipino peacekeepers trapped in these positions since Thursday after refusing to surrender their firearms.

There were no reported casualties so far among the peacekeepers, the source said.

Read Next
Palace: Gov’t has contingency plans for trapped PH peacekeepers
EDITORS' PICK
Nograles: Cabinet members to donate 75% of monthly salary to aid COVID-19 fight
Quick chat with Nicole Andersson: ‘You really don’t need much to be happy’
IATF to LGUs: Issue ordinances vs attacks on frontliners, COVID-19 patients
Diokno to Duterte: OK to make fun of buck tooth, but focus on people’s needs first
Robredo spox thanks Duterte for defending VP’s efforts vs COVID-19
10 Filipinos positive for COVID-19 in UK, 7 in Ireland — envoy
MOST READ
Sotto on Isko Moreno’s call: We do our job without the media following our every move
ADB warns PH against prolonged lockdown
Cook more and eat less: Tips on your quarantine diet
Cayetano: Almost 200 solons to donate 1 month salary to raise P50M for COVID-19 fight
Don't miss out on the latest news and information.