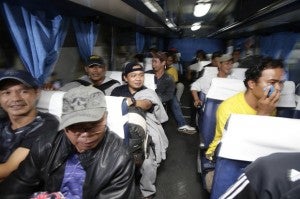 MANILA, Philippines – The government on Sunday said it would continue to evacuate Filipinos from war-torn Libya after planes carrying 766 Filipinos arrived in Manila.

(Foreign Affairs Secretary Albert del Rosario said the government’s commitment to ensure the safety of all Filipinos in dangerous situations abroad remains. According to him, the evacuation of Filipinos from Libya will continue.)

Coloma said Malacanang was “happy” with the news that 766 Filipinos were able to return to the Philippines through Philippine Airlines flights after riding a rented ship to Malta.

There are now 2,727 Filipinos repatriated from Libya.

Coloma said Philippine nationals still trapped in Libya should contact the embassy in Tripoli so they can be assisted.

Meanwhile, families of the OFWs could contact the Department of Foreign Affairs through the hotlines (02) 552-7105 and (02) 834-4685. They may also send their concerns to [email protected]