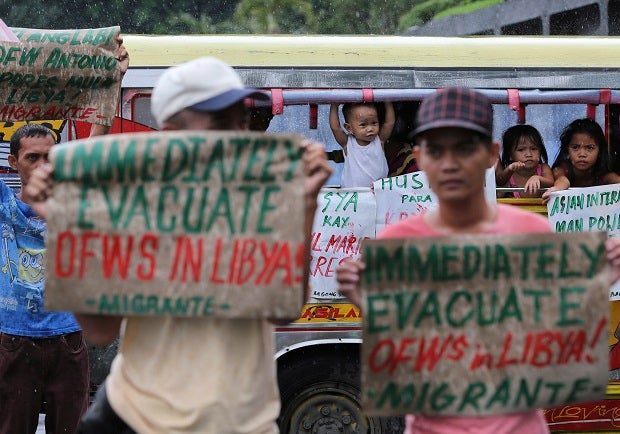 Filipino children watch as activists hold a rally in front of the Department of Foreign Affairs in suburban Pasay, Philippines as they call on the government to ensure the safe and immediate evacuation of Overseas Filipino Workers (OFWs) from war-torn Libya on Tuesday, Aug. 5, 2014. The Foreign Affairs Department and Overseas Workers Welfare Administration said about 13,000 Filipino workers are currently in Libya and less than a thousand has so far been repatriated. AP

MANILA, Philippines—Overseas Filipino Workers (OFWs) are backing out from being repatriated in the strife-torn Libya despite the expected arrival of a chartered ship that will ferry them to Malta, the Department of Foreign Affairs (DFA) said Wednesday.

“Many of them changed their mind. In Misrata, there were 610 who signed up as of August 10, now there are only 365,” DFA spokesman Charles Jose said in a briefing.

The chartered ship has a capacity of 1,500 and was rented by the Philippine Government at a cost of $1.8 million. It sailed from Malta last August 12 and will dock at the ports of Benghazi on August 13 for five hours to load Filipinos there.

It will then travel to the port of Misrata to dock and load OFWs for five hours on August 14 after which it will go back to Malta where Philippine Airlines chartered planes will fly them to Manila.

Asked why the Filipinos there had backed out, Jose simply said “they were the ones who called the [Philippine Embassy in Tripoli] and asked their name to be removed from the list.”

“Of course we want to save our OFWs there and alert level 4 (mandatory repatriation) has been raised there since July 20. Many had already registered but then they backed out.

Jose admitted that despite being called “mandatory” repatriation, the DFA couldn’t really force them. He said it’s still up to them whether they want to leave or not.

Jose said he has already asked the Philippine Embassy what reasons the Filipinos there gave for backing out, but they have not yet responded to him.

There were initially around 13,000 Filipinos in Libya. More than 1,000 were already repatriated since the violence broke out again in the fragile nation.

Filipinos were previously repatriated from the country in 2011 because of the rampant violence that led to the fall of dictator Muammar Gadhaffi who has been in power for 40 years.

The peace was broken again in 2014 as rival militia groups fight for control of territory amid weak government control.

Evacuation of OFWs in Libya rescheduled for August 13