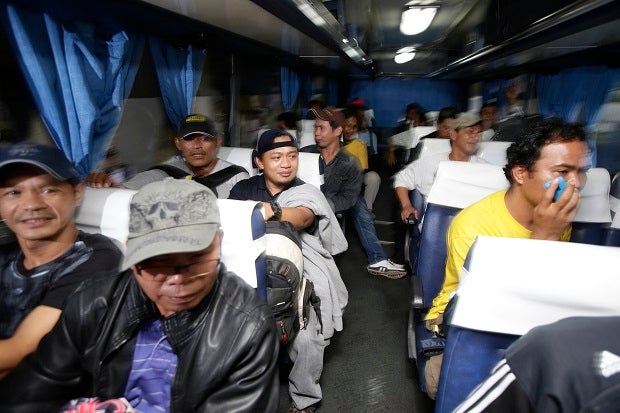 Overseas Filipino Workers (OFWs) arrive at the Ninoy Aquino International Airport after being repatriated from war-torn Libya Monday Aug. 4, 2014 at suburban Pasay city, south of Manila, Philippines. The Foreign Affairs Department and Overseas Workers Welfare Administration said about 13,000 Filipino workers are currently in Libya and less than a thousand has so far been repatriated. AP

MANILA, Philippines—Board the chartered ship for repatriation out of Libya now because it’s the only one there is, Foreign Affairs secretary Albert del Rosario told Filipinos in Libya on Thursday amid reports that hundreds of them had backed out from repatriation.

“There will be no ship after this. It’s difficult to get a ship and we don’t have the numbers to be able to support another ship,” del Rosario told reporters in an interview.

Department of Foreign Affairs (DFA) spokesman Charles Jose said in a briefing Wednesday that the number of Filipinos who registered for repatriation got smaller by a few hundred.

Some 450 passengers boarded the chartered ship when it docked in Benghazi. The initial number of registrants there was 490, but decreased to 477.

“The ship left Benghazi with 449 passengers and we also have citizens of other countries on that ship,” del Rosario said.

There was one American, five Maltese, one Ukrainian, and five Spaniards who boarded the ship from Malta that was rented at a cost of $1.8 million and has a capacity of 1,500.

After Benghazi, the ship will next dock at Misrata some time Thursday where there were 365 currently signed up for repatriation.

The previous number of registrants in Misrata was 610 as of August 10, Jose said.

“The numbers went down because over a hundred employees who registered for mass repatriation were sent home at their company’s expense,” he said in a text message late Wednesday.

After loading passengers in Misrata, the ship will sail back to Malta where chartered Philippine Airlines planes will fly them back to Manila.

Del Rosario said that Filipinos backing out of repatriation was also experienced in 2011 during the first break out of violence in the country leading to the fall of dictator Muammar Gaddhafi.

“A couple of days later, those same people that backed out were begging us to come back and repatriate them,” he said.

Jose said in a briefing Thursday that even without the ship, Filipinos can still be evacuated through land borders in Tunisia ans Egypt.

“We can evacuate them using the land border exits. Egypt has assured us that we can use the border,” Jose said.