OFWs in Nigeria ‘more concerned’ on job stability than Ebola 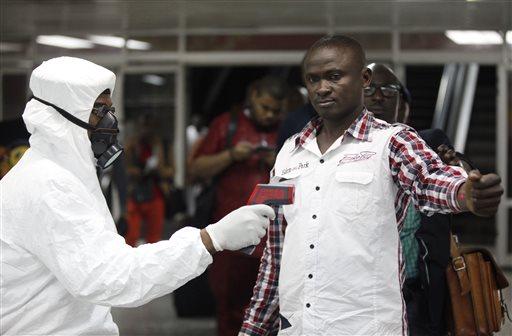 In this Aug. 6, 2014 file photo, a Nigerian port health official uses a thermometer on a worker at the arrivals hall of Murtala Muhammed International Airport in Lagos, Nigeria. As the Ebola outbreak in West Africa grows, airlines around the globe are closely monitoring the situation but have yet to make any drastic changes. AP

MANILA, Philippines—The recent inclusion of Nigeria among the West African nations battling the deadly Ebola virus alarmed the 7,000 Filipino workers deployed in various states in Nigeria, which has just recovered from the deployment ban five years ago.

Filipino workers are mostly engineers in oil industries and multi-national construction firms; teachers, accountants and those who are married to Nigerian nationals.

Lito Nucum, a senior accountant to Dantata and Sawoe, the largest construction firm in Abuja, the federal capital, expressed his concern on the latest development on the Ebola virus that swept the West African nation during the previous weeks.

He said it may cause false alarm especially to the Philippine Government. Nucum is a well-respected member and officer of the Filipino community in Abuja.

“To talk about possible evacuation or think about repatriation is going too far and it can cause false alarm. The Ebola outbreak to date caused the death of about 1,000 Sierra Leone, Liberians and Guineans, plus two in Lagos, Nigeria,” he said.

Aside from job security, Nucum said that Lagos State is far from Abuja. Lagos is the most populous city in Africa with 20 million people.

In the Philippines, the government is said to be ready to screen all the passengers coming from the affected West African countries. Securing medical clearance as well as undergoing medical test from their work areas are the requirements of the Department of Health (DoH) to Filipino workers returning from Ebola-affected countries.

However, Mercy Subibe, also an accountant at Julius Berger in Abuja said the requirements of the DoH are possible but upon coming back to Nigeria, there might be problems with the Immigration Officers at the Philippine ports. This is also the concern of Roy Rivas.

“Makakadagdag din siguro kung kukuha din tayo sa Pilipinas ng Medical Health Clearance sa araw ng alis natin pabalik dito para siguradong hindi tayo ma-ban sa airport natin. Yung pabalik kasi ang nakakatakot (It would help also if we will get a medical health clearance in the Philippines on the day of our arrival here so we won’t be banned in our airport. It’s the returning that we fear),” he said.

Vangie Novio, an OFW in Nigeria for 30 years, said that precautionary measures are already given to the Filipino workers such as limiting unnecessary travel to Lagos and to seek medical help if symptoms similar to Ebola are showing like fever and weakness of the body.

“I am not afraid of Ebola Virus.  To earn ‘pogi’ points they might resort to over reacting by imposing deployment ban. Losing my job because of deployment ban is what I am exactly afraid of,” said Nucum.

Nigeria has 11 confirmed cases following the deaths of a Liberian-American Jonathan Sawyer who were able to travel to Lagos and the nurse who treated him and the other person who had direct contact with him at the airport.

All other suspected cases including a Canadian who traveled to Nigeria and a Nigerian in Hong Kong tested negative for the deadly virus.

According to the WHO, the disease appears contained in Nigeria, but “elsewhere, the outbreak is expected to continue for some time.”