MANILA, Philippines—The Department of Foreign Affairs urged thousands of Filipino workers in Libya on Saturday to leave the strife-torn nation now while they still can, warning that the remaining exit routes were closing fast.
A ship chartered by Manila is set to sail from Malta in the coming days to pick up Filipinos from the ports of Benghazi, Misrata and possibly Tripoli, a foreign department statement said.
However, the government has expressed frustration at the reluctance of many of the 13,000 workers to leave due to concerns they would not find jobs at home.

“The (DFA) is appealing with urgency to those who have not made the decision to be repatriated to please consider doing so as the avenues of repatriation are quickly diminishing,” the statement said. 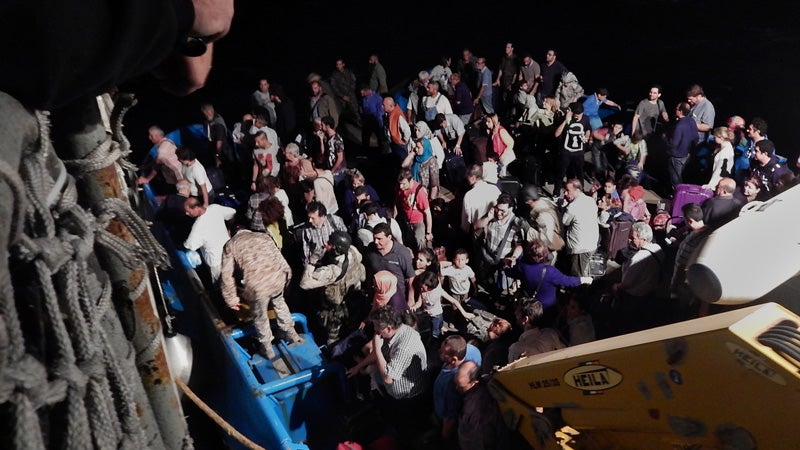 In this handout photo provided by Hellenic Navy, evacuees wait to board the Greek frigate Salamis, anchored outside Libya’s capital Tripoli, late Thursday, July 31, 2014. The ship was used to transport 186 people, including Greek Embassy staff, other Greek nationals and citizens from China, Britain, Belgium, Russia and Albania to a port near Athens. With the violence in Libya escalating to its worst level since the 2011 ouster of dictator Moammar Gadhafi, governments from around the world are scrambling to evacuate their citizens from the country, many seeking help from nearby Greece. (AP Photo/Hellenic Navy)

Foreign Affairs Secretary Albert del Rosario, in neighboring Tunisia to coordinate the evacuations, fears the route to sea “may be the only means of repatriation”, it said.

Philippine officials have said ships would be able to carry about 1,500 people at a time.

The Philippines warned Filipinos to leave Libya on May 30. It then decided on a mandatory evacuation order last month following the beheading of a Filipino construction worker in Benghazi.

A Filipina nurse was also abducted and gang-raped in Tripoli on Wednesday.

Despite the dangers, the foreign department said only about 800 have returned to the Philippines.

More than 200 others are being processed to be repatriated from Tripoli, it said, adding “this number is rapidly increasing.”

Del Rosario spoke to a group of 95 Filipinos awaiting flights home from Tunisia and urged them to “convince their friends and co-workers who are still in Libya” to leave now, it added.

The Philippines previously evacuated its workers in Libya in 2011 during the violent chaos leading to the toppling of the late dictator Moamer Kadhafi.

However, about 1,600 Filipinos, mostly doctors and nurses, elected to stay throughout that upheaval.

The Philippines lifted a travel ban to Libya in 2012, but re-imposed it last May.

About 10 million Filipinos work around the world, earning more money in a wide range of skilled and unskilled sectors than they could in their struggling homeland.