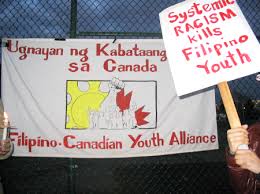 TORONTO, Canada – While there is considerable upward mobility among children of immigrants in Canada some groups, including Filipino youth, are less likely to be among them, a study reported.

The study, “Understanding Intergenerational Social Mobility: Filipino Youth in Canada,” was published in February this year by the Institute for Research on Public Policy (IRPP), an independent, bilingual Canadian non-profit organization.

York University Geography Professor and Center for Asian Research Director Philip Kelly wrote: “Canadian research on intergenerational social mobility has shown that there is considerable upward mobility among children of immigrants. However, there are some groups that are exceptions to this overall pattern. Filipino youth present a double anomaly: they are less likely to hold a degree than either their parents or their peers in other racialized groups.”

Gathering data from 1980 to 2009, Kelly compared the literacy rate among the three major countries that are the sources of immigrants to Canada, namely, China, India and the Philippines.

“The percentage of Filipinos educated to the bachelor’s degree level or above is much higher than that of any of the comparison groups. If rates of participation and unemployment are taken as indicators of labor market success, then Filipinos are doing very well, but there is evidence that their high levels of human capital are not being recognized in the (Canadian) labor market.”

Over educated but underpaid

The percentage of Filipinos who are in management occupation is far lower than the rate of the comparison groups, and only about a third of the rate found in the (Canadian) population, the study found.

Meanwhile, there are very high levels of concentration among Filipino men in manufacturing industries and among Filipino women in the health care sector. “Finally, mean employment income (for those who worked full-time for the full year) for Filipinos is well below that of the comparison groups, especially in the case of Filipino mean, whose mean wage is almost CAD20,000 below the average for the population (despite the fact that they are almost twice as likely to hold a university degree.)”

But he found startling situations for college graduates. “With 41 percent holding a bachelor’s or higher–level degree, non-immigrant Filipino women exceed the (Canadian) population’s average but fall below that of most other racialized groups (with the exception of Blacks and Latin Americans). Compared to Chinese and South Asian women, they are far behind.”

Canadian-born Filipino men present a somewhat similar picture, graduating from university at rates that exceed Canadian averages,” Kelly said. “However, they are well behind several other groups.”

“It is notable that Filipino men perform considerably worse than Filipino women in terms of university education, and in terms of failure to attain any certification at all (including high-school graduation), but this is a gendered pattern of uneven achievements that holds true for all population groups,” Kelly added.

Kelly is not the first to present this trend. In 2009, another study using the 2002 Ethnic Diversity Survey “found that intergenerational upward mobility in terms of rates of university education, occurred between the first and second generations in all immigrant communities except for the Filipino and black visible minorities.”

Another study in 2011 using Ontario census data from 1996 and 2006 showed that Filipinos and Americans were the only groups in which second generation youth “did not tend to surpass their fathers in terms of educational attainment (although in both cases, the fathers were very well educated.)

Probing deeper for the causes of these “anomalies,” Kelly found another one. While it has long been held that the Filipino’s fluency with English gives him an advantage over other immigrants, Kelly built a case against this.

“In the Philippines, English fluency is often considered a status symbol. Most parents are proficient in English, but it is precisely because of this that some are self-conscious about any imperfection in their use of the language,” Kelly explained.

“This introduces an element of embarrassment to their interactions with authority figures such as teachers, counselors or principals at formal school events” especially if they were white, Kelly added.

Kelly presented occupational data suggesting this apprehension about English may be a factor in Filipino parents’ low level of involvement in their children’s education. In addition, the shift schedules of nanny mothers and manufacturing worker fathers contribute to the poor educational attainment level, he wrote.

“The downward mobility and de-professionalization experienced by parents upon arrival in Canada has an impact on parenting style and authority,” Kelly wrote. “One respondent poignantly explained that his father had been an executive in the Philippines; security guards saluted as he arrived at his office each morning. On arriving in Canada, he had to take a job cleaning toilets.”

Another respondent who “pointed out that the Vancouver Sun had produced a supplement profiling the 100 most influential Chinese Canadians and South Asian Canadians in British Columbia, but no such exercise had ever been done for the Filipino community.”

Since there are few well-known Filipino successes in Canadian major business and politics, Kelly wrote, Filipino youth do not have a role model.

Most damaging, he observed, “Many respondents acknowledged that Filipinos experience racialization but they seldom saw this in a negative light. More commonly, they noted that such racialization consisted of representing Filipinos as ‘hardworking’ and ‘caring.’”

While such representations are positive, “they are implicitly limiting because they connote specific types of employment and levels of professional seniority. In particular, Filipino women in fields other than caregiving often have to confront the equation of Filipino-ness with caregiving. In some cases, this kind of connotation leads young people to reject their Filipino identity.”