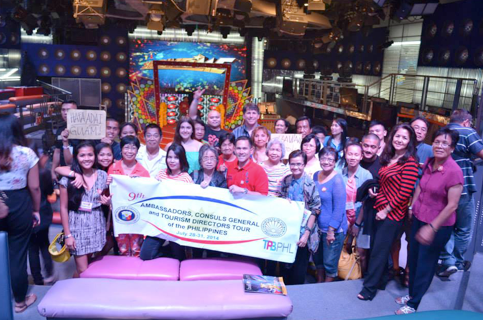 MANILA – Despite the threat of tropical depression Inday brewing northeast of the Philippines, the homecoming of close to 300 Filipino-Americans from all over the US on July 28 to 31, was declared a success by the Philippine Department of Tourism.

The visitors arrived to a VIP reception on July 28 at the Ninoy Aquino International Airport, before they were swept in a whirlwind of activities in the next three nights.

Philippine Ambassador to the United States Jose L. Cuisia Jr., who headed the delegation from Washington, DC, warmly welcomed the participants and further encouraged them to visit the Philippines often for a deeper appreciation of all things Filipino.

The visitors were serenaded, wined, dined and given some of the best receptions organized by Tourism Promotions Board, DOT’s marketing arm and Rajah Tours Philippines, the ground handler of the annual ACGTDT.

Meanwhile, the fellowship night hosted by Western Union at Dusit Thani Hotel on July 29 had lots of music, entertainment by a live band and dancing.

The all-white-dress themed party was made more exciting by the surprise raffle prizes with a lucky participant winning a round trip ticket from the United States to the Philippines.

Those who joined the Studio Tours of GMA Network and ABS-CBN TV met and had selfies with showbiz personalities when they attended GMA’s noontime game show “Eat Bulaga” and ABS-CBN’s musical variety show “It’s Showtime.”

One of the highlights of this year’s visit was a guided tour to the Pico de Loro Cove at Hamilo Coast resort in Nasugbu, Batangas. Traveling to Nasugbu via the Cavite Expressway or popularly known as Cavite was without delay courtesy of the PNP (Philippine National Police) motorcycle cops who provided escorts for the tour participants.

At Pico de Loro the tourists were treated to a warm VIP welcome with festive cultural entertainment, VIP dancers, rondalla music, a sumptuous lunch and lots of opportunities for swimming, diving, snorkeling or simply strolling around the resort.

Even the send-off party was done in style with upbeat music and mob dancing as participants started to board their buses for the trip back to Manila. 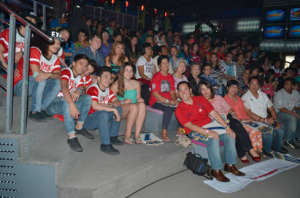 Participants of the 9th ACGTDT led by Juan Gabriel E. Agcaoili of the Philippine Department of Tourism in San Francisco (DOTSF) at the Studio of ABS-CBN’s “Showtime.” CONTRIBUTED PHOTO

The visitors also joined the traditional wreath-laying ceremony at the Rizal Monument in Luneta. Thereafter, they motored to Malacanang for a tour and a luncheon at the Palace.

While the participants were unable to have an audience with President Benigno S. Aquino III, Secretary Herminio Coloma, Jr., head of the Presidential Communications Operations Office (PCOO) and Department of Foreign Affairs Secretary Albert del Rosario were on hand to welcome them.

Ambassador Cuisia presented this year’s participants to the 9th ACGTDT and introduced each delegation from all Foreign Service Posts. Secretary Del Rosario positively talked about EDCA, the strong Philippine-US relationship and the two countries’ economic partnership.

Launched in 2005 during the term of then Philippine Ambassador to the United States and now Foreign Affairs Secretary Adel Rosario, ACGTDT is now nine years old and has consistently attracted hundreds of participants every year.

It is a joint project of all Philippine Foreign Service missions in the U.S. located in Agana, Chicago, Honolulu, Los Angeles, New York, San Francisco and Washington, DC.

The program, which was designed by the Department of Tourism (DOT) as a banner tourism project, encourages Filipino-Americans to visit the Philippines’ various tourist destination and to develop a deeper appreciation of the history, heritage and cultural of the country.