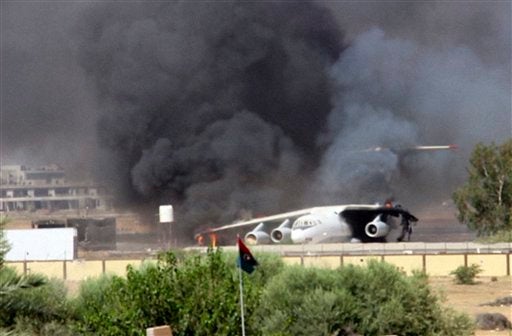 This frame grab shows an airplane on the tarmac of the airport belching black smoke into the air during fighting between the Islamist Misarata brigade and a powerful rival militia, in Tripoli, Libya. AP

MANILA, Philippines–The government’s plan to evacuate by sea over 1,000 Filipinos in Libya starting Sunday had been temporarily scuttled, according to the Department of Foreign Affairs (DFA).

“Date has been pushed back,” Jose said in a text message to reporters.

Jose said he would have more details by Monday, when asked for the reason of the delay and the new evacuation date.

A total of 1,036 Filipinos in Benghazi and Misrata have signed up in the latest effort of the government to take them out of Libya where violence has worsened as the Libyan government try to fight off armed militias.

The plan was to pick up the latest Filipino repatriates in the two port cities by a ship that the government has chartered to evacuate them.

The evacuation was originally set to start on Sunday in Benghazi and in Misrata on Monday. From Misrata, the ship was scheduled to sail and arrive in Malta by Tuesday.

The government will be spending $1.8 million to ferry the Filipinos from the Libya port cities to Malta.

As this developed, the Overseas Workers Welfare Administration (Owwa) will release starting this week the one-time Financial Relief Assistance Program (FRAP) emergency aid of P10,000 to overseas Filipino workers in Libya who have been repatriated.

The OFWs, including both Owwa members and non-members, can claim the funds from Owwa regional offices nationwide upon presentation of their travel documents and valid identification cards.

In a statement, the Owwa said only those repatriated from the strife-torn North African country after the Department of Foreign Affairs raised Alert Level 4 on July 20 can avail of the financial assistance.

The emergency aid was approved last week by the Owwa board of trustees, chaired by Labor Secretary Rosalinda Baldoz.

“The cash relief assistance is in consonance with Owwa’s commitment to promote the welfare and well-being of OFWs, especially when assistance is needed most,” she said.

Baldoz noted that the financial aid was also in line with the labor department’s package of reintegration assistance to OFW repatriates under the government’s Assist WELL program. WELL is short for welfare, employment, livelihood and legal assistance.

Read Next
Ebola alert at Naia
EDITORS' PICK
Lacson wants DOF to suspend TRAIN law as oil prices rise
153 protests filed vs China actions in PH waters in 2021 — DFA
Next level mobile photography within reach with vivo X70 co-engineered with ZEISS
Leaked: A 60x Zoom and all-new Helio G96 mean a complete overhaul for TECNO Mobile’s new CAMON 18 series
Delivering delight against all odds
Duterte blasts rights groups for overlooking the ‘other side’ of drug war
MOST READ
Robredo to supporters: Be calm, gentle and do good deeds
Matibag calls Senate budget hearing ‘political,’ gets kicked out
Duterte inaugurates P684-M bypass road project in Quezon
Duterte: No drug dealers among the rich in PH
Don't miss out on the latest news and information.