Evacuation of OFWs in Libya rescheduled for August 13 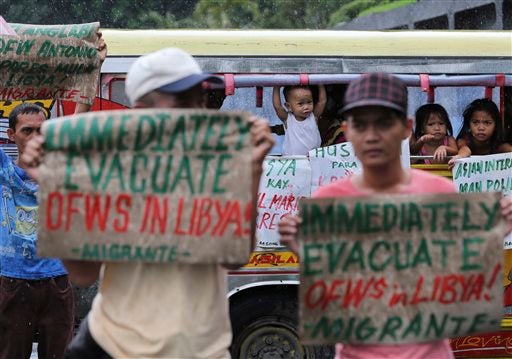 Filipino children watch as activists hold a rally in front of the Department of Foreign Affairs in suburban Pasay, Philippines as they call on the government to ensure the safe and immediate evacuation of Overseas Filipino Workers (OFWs) from war-torn Libya on Tuesday, Aug. 5, 2014. AP FILE PHOTO

MANILA, Philippines – Filipinos awaiting repatriation in Libya will have to wait for a couple of days more as the arrival of the Philippine government chartered ship has been rescheduled for August 13 “due to logistical reasons.”

“According to the Philippine Embassy in Tripoli that is being assisted by Red Crescent, they assured us that port of Benghazi can be used [for the evacuation],” Department of Foreign Affairs (DFA) spokesman Charles Jose said in a press briefing Monday.

“The ship will be coming from Italy then travel to Malta before heading to Libya. The vessel has been at sea for several days so it will have to undergo refueling while at sea,” Jose said.

The ship has a capacity for 1,500 passengers and was chartered for $1.8 million.

Three Philippine Airlines (PAL) chartered planes will fly the OFWs out of Malta.

When asked about whether there were potential threats to the ship from the rival militia groups battling within Libya, Jose reiterated that the Red Crescent has given assurance the port will be open for use.

Libya is almost in a state of civil war as militias battle for control of territory amid weak government control.

The DFA has repeatedly urged the estimated 13,000 overseas Filipino workers (OFWs) to return home after it raised crisis alert level 4.

An OFW’s story: 11 hours of terror in Libya