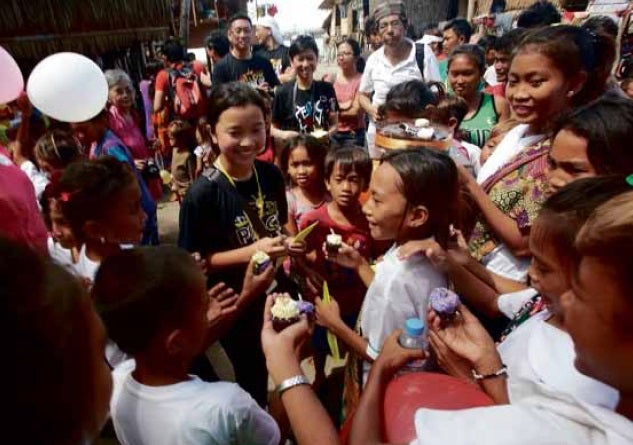 LUCENA CITY, Philippines—Cassie Eng, an 11-year-old 6th grader at a Chinese-American international school in the United States, looked just like any other carefree kid, playful and fun-loving, when she first came to visit this city in Quezon province.

Except that Eng, even at a very young age, has taken to heart a strong belief in the value of education.

It was because of this that she flew early last month from San Francisco, California, with her mother Mailou, to celebrate her 11th birthday with the children of seafaring Badjao families who have settled on the shores of Barangay Dalahican and to turn over to them the presents she would have received for her birthday.

“I saw a documentary film about them and I was moved,” Eng said, noting how Badjao parents would send their kids to the city to beg.

This is not the first time that Eng, the only child of a Filipino and Chinese immigrant couple in the United States, has chosen to celebrate her birthday through charity work.

Accompanied by some 20 volunteers from various organizations, Eng spent the whole day of July 11 with the children of Dalahican and the Badjao community.

“Perhaps I can make friends here,” a beaming Eng said before proceeding with the gift-giving at a chapel in Dalahican.

In a period of three weeks before her birthday on July 2, Eng single-handedly raised about $6,000 for the bags and school supplies that she intended to distribute to some 300 schoolchildren in Dalahican, a coastal village about three hours’ drive from Manila.

Since age 6, Eng has been asking for donations to various causes instead of birthday presents, her mother said.

“When I was 6 years old, I got a book about happiness called “Have You Filled a Bucket Today”?” she told the 300 children who listened to her speak.

“Have You Filled A Bucket Today?: A Guide to Daily Happiness for Kids,” written by Carol McCloud, is a heartwarming children’s book that Eng received as a gift on her 6th birthday.

According to Eng, the book says that everyone carries around an “invisible bucket that one can fill by doing good things for oneself and  others.”

She said one could fill one’s bucket only by filling those of others.

“In truth, you can fill your bucket only by doing the right things for yourself and for others,” she said, reading from a prepared speech.

Birthday for a cause

According to Eng’s mother Mailou, her daughter was first moved by a music video of Michael Jackson that showed starving children in Africa.

“Instead of birthday presents for her sixth birthday, she wanted people to give her money so she could donate to a feeding program in Manila,” Mailou said.

Since then, Eng has never gotten birthday presents and would always celebrate her birthday for something connected to a cause, her mother said.

In just a few short months, she and her classmates were able to raise $12,000, which they donated to Yellow Boat of Hope Foundation, an organization giving boats to poor communities, some of which with children who have to wade and swim through bodies of water to go to school.

The money was used to buy more than 40 boats, which were given to  fishermen in Leyte and Eastern Samar provinces who had lost their fishing boats, and thus their livelihood, to the destructive typhoon.

In May, when she and her family last visited Manila to attend a relative’s wedding, Eng said she met with the founder of the social enterprise, which gives away school bags to poor children.

With every purchase of a bag from Bag943, another bag goes to a child in a poor community.

Inspired by another story

“I was inspired by Kuya Josh’s story and I thought I wanted to help,” Eng told the children in Lucena.

The story of Josh Mahinay, Bag943’s founder, is one that Eng likes to tell to everyone she meets.

Mahinay, who grew up poor in Mindanao, would walk 10 kilometers  to school carrying a plastic bag for a school bag.

When he was in fourth grade, someone gave him his first sturdy backpack. The young Malinaw felt empowered by that and was driven to study diligently and work harder for his dreams.

Mahinay finished college at the top of his class and was able to work in the United States for five years as a marketing officer for a company.

Two years ago, he decided to return to the Philippines to set up Bag943 (short for Be A Giver) and begin to pay it forward.

Eng said Mahinay’s story could give hope to other children in poor communities all over the country. “One or more of the kids there could be like Kuya Josh,” she said.

She has set up a fund-raiser called Cassie’s Bag of Dreams Challenge through a website at http://www.gofundme.com/9s25ok where people can donate money online.

Eng has begun sending letters to friends and relatives in and outside the Philippines, telling them about Mahinay’s story and his advocacy.

“I feel I am so fortunate and I hate to see other children suffer,” she said.

On July 11, Eng and members of nongovernment organizations Bag943, Yellow Boat of Hope Foundation and Payatas Orione Foundation, which have all adopted the Badjao community in Dalahican, trooped to Lucena to give the children a treat.

Eng led the distribution of bags in the morning and read a story to the Badjao children in the afternoon.

John Chua, a veteran photographer and one of those who accompanied Eng, said the girl’s good deed should inspire hundreds of others to do the same. “She is still a kid and yet she can do big things like this,” Chua said.

Anton Mari Lim, a veterinarian and founder of Yellow Boat for Hope Foundation, said Eng was giving the Lucena children not just the bags but also the drive to strive and get out of poverty.

“Every little good deed counts for communities with nothing,” Lim said.

Chua, Lim and the other organizations have been helping the Badjao for several years now, providing them with education and livelihood.

Before Eng and the volunteers left the community later that afternoon, the Badjao children gave her a chocolate cake with the words “Happy Birthday, Cassie.”

Then the Badjao girls—who are mostly her age—in their school uniform and malong, began twisting and flicking their wrists and swaying their hips, showing their guest the traditional Badjao dance.

Asked what she thought about the day later that night, Eng said, raising her arms: “I think I did a good job!”