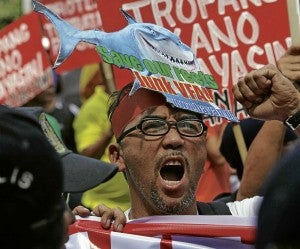 PROTEST AT US EMBASSY Activists protest the destruction of Tubbataha Reefs as a result of a US Navy minesweeper getting stuck at the World Heritage Site. NIÑO JESUS ORBETA

The US government has apologized and pledged to provide “appropriate compensation” to the Philippines for the damage caused by the grounding of a US warship at the protected Tubbataha Reefs in the Sulu Sea.

The US compensation will come in a package that includes a joint scientific assessment of the reefs for rehabilitation, a P4.1 million ($100,000) grant for coral restoration on the reefs, and funding for improvements in the communications system within and around the natural park.

In a statement released by the US Embassy in Manila on Sunday, the US government said it had been committed over the past decade to help the Philippines protect its marine ecosystems, including coral reefs.

“In view of the damage caused by the USS Guardian accident at Tubbataha Reefs, the US has expressed it regrets and is prepared to provide appropriate compensation to the Republic of the Philippines. In addition to compensation, the US government is planning a number of other activities which will underscore its commitment to Tubbataha’s recovery and the protection of the marine resources of the Philippines,” the statement said.

No comment was immediately available on Monday from the Tubbataha Protected Area Management, which had been talking about going after the US Navy for the damage caused to the reefs by the Guardian.

The Department of Foreign Affairs (DFA) had cautioned the Tubbataha gatekeeper against making too much noise about Philippine environmental laws and penalties lest it antagonize the United States, which could opt to play hardball and not pay compensation at all.

In a meeting with Tubbataha, Navy, Coast Guard, Palawan local government and environmental officials on Jan. 31, Assistant Foreign Secretary for American Affairs Carlos D. Sorreta said the Americans were to announce payment of compensation for the damage to the reef.

“But if they hear many things like threats, their lawyers will advise them not to commit to do anything that may be construed as an admission of guilt,” Sorreta said. “That hardens them and pushes them to the extreme of hiding behind immunity. We want a win-win situation.”

Sorreta said the DFA was not advising caution to side with the Americans. “[R]ather it is protecting our own self-interest. The compensation that we will ask for will cost more than the fines,” he said.

The grounding of the Guardian on the reef on Jan. 17 has caused damage to 4,000 square meters of coral on the reefs.

The Philippines imposes a fine of $300 for every square meter of damaged coral.

Left-leaning groups on Monday asked Justice Secretary Leila de Lima to bring criminal charges against the officials and crew of the Guardian for damage to Tubbataha, a Unesco-World Heritage Site area that the Philippines considers a national treasure.

Famous around the world for its breathtaking corals and unique marine life, Tubbataha rivals Australia’s Great Barrier Reef as a tourist attraction.

Leaders of Pambansang Lakas ng Kilusang Mamamalakaya ng Pilipinas (Pamalakaya) and the Anakpawis party-list group handed a letter to the Department of Justice (DOJ) on Monday, asking De Lima to take legal action not only against US officials but also against Philippine officials who had not done anything about making the United States accountable for damage to Tubbataha and allowed the officers and crew of the Guardian to leave the Philippines.

The two groups said the damage to the reefs would affect the livelihood of 100,000 fishermen and workers on commercial fishing vessels in the West Palawan Sea and Sulu-Celebes Sea and nearby fishing grounds in the Visayas and Mindanao.

They said the damage to the reefs merited the DOJ endorsement of their demand for the abrogation of the Philippines’ Mutual Defense Treaty and Visiting Forces Agreement with the United States.

De Lima had no immediate comment on Monday about the two groups’ request.

In the US Embassy statement, the US government said it was now forming a US interdisciplinary scientific team that would “initiate discussions with Manila to review coral reef rehabilitation options in Tubbataha, based on assessments by Philippine-based marine scientists.”

“The US government will offer to fund a site survey for proposed improvements in the existing ranger station in Tubbataha Reef,” it said, adding the proposals could include the installation of radar and communications equipment that could help park rangers and the Philippine Coast Guard avoid collisions and monitor marine poachers.

In the next weeks, the US Embassy will “organize a roundtable with local coral reef conservation experts to listen to concerns and discuss options for conservation and restoration of the Tubbataha Reefs.”

Those who will be invited to the discussion include the US Agency for International Development (USAID), the US National Oceanic and Atmospheric Agency, concerned government agencies and the Tubbataha Management Office.

“Through USAID’s Coral Triangle Support Partnership, P4.1 million, or US$100,000, will be granted to a Philippine university to support coral restoration research at Tubbataha Reef,” the embassy said.

The US government said it would also share hydrographic survey data with the Philippine National Mapping and Resource Information Authority in a bid to improve cartographic information available on the Tubbataha protected area and its environs.

“The Tubbataha Reef accident focuses renewed attention on this goal and offers opportunities for future bilateral cooperation in science and technology that reflect our longstanding shared commitment to the protection of the marine resources of the Philippines,” the embassy said.

It said the US government had invested more than P1.9 billion, or $46.5 million, to support marine biodiversity conservation programs in the Philippines over the past decade.

The investment includes the USAID’s Philippines Coral Triangle Support Partnership Program, which since 2007 has contributed P254.2 million, or $7.2 million, to protect coral reef ecosystems in the Philippines, including Tubbataha Reefs.

The 63-meter-long, 1,300-ton Guardian remains stuck on the southern atoll of Tubbataha, waiting to be broken apart and removed piece by piece to avoid further damage to the reefs.

The US Navy has presented to the Philippine Coast Guard a “dismantling plan” using floating cranes to remove the Guardian from the reef.

Lt. Commander Armand Balilio, spokesman for the Coast Guard, told the Inquirer on Monday that the plan must be approved by the Philippine government before the removal of the vessel could begin.

Balilo said the SMIT Borneo of SMIT Singapore Pte. Ltd., the floating crane contracted by the US Navy to break the Guardian apart, arrived in Puerto Princesa City in Palawan last week.

He said the task force headed by the Department of Transportation and Communications (DOTC) was amenable to the US Navy’s decision to break the ship apart, but was concerned about further damage the removal of vessel could cause to the reefs.

“The task force will take up the issue. Its decision needs the final approval of the DOTC,” he said.

The Coast Guard is a member of the task force. The other members are the private Tubbataha Reef Foundation and provincial and local government representatives from Palawan.—With reports from Gil C. Cabacungan and Jerry E. Esplanada