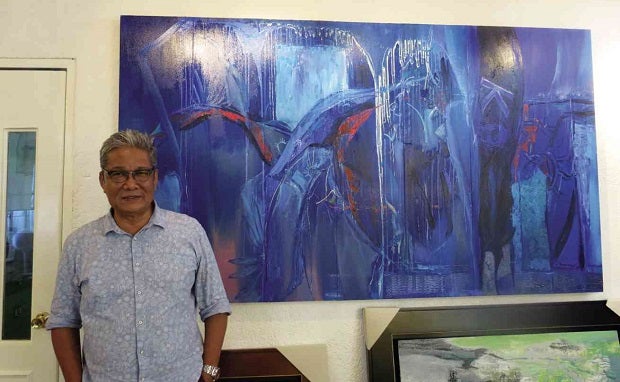 PROUDLY PINOY Wilwayco and his Soldier’s Arch painting that features flags—from the first flag of the Katipunan to the current red, white and blue symbol of the Philippines. Photo by Rima Jessamine M. Granali

Tales of revolutionary struggles and triumphs come to mind as one looks at a painting of layers of flags in varying shades of blue.

The Soldier’s Arch and other paintings in Edwin Wilwayco’s Parañaque home are inspired by the Philippines’ colorful past and vibrant culture.

“I will always be proud to be a Filipino,” says the world-renowned abstract expressionist who has had solo exhibitions in New York and Rhode Island, United States; Paris, France; Essen, Germany; Stockholm, Sweden and Singapore.

Wilwayco did his first painting of flags in 1979 for his second one-man show. “I wanted something very Filipino to be identified with my style,” he says.

Then 27-year-old, Wilwayco was praised for his work, with the art critic Paul Zafaralla calling him “historian of the brush.” But, on opening night, he sold only one painting.

But today he thinks of it as part of “God’s grander plan.”

“Every rejection is a blessing in disguise,” says Wilwayco, who is now based in Providence, Rhode Island, with his wife Loby and daughter Moma.

At that time, however, without the encouragement of his former University of the Philippines Diliman professor Rod Paras-Perez, he was considering giving up painting and concentrating on his advertising job. 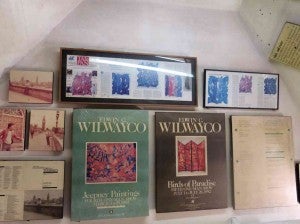 Wilwayco believes that bumping into his former mentor in Makati was part of God’s plan for him. The meeting was “a turning point” in his life.

Wilwayco, “shedding tears of bitterness,” declared, “I’m not painting anymore.” But Perez suggested, “Why don’t you apply for a British Council grant?”

Wilwayco did and got a grant for six months of studies at West Surrey College of Art and Design in England where a professor encouraged him to pursue “very Filipino” themes.

He chose as subject the jeepney, the cheapest and a very colorful mode of transportation.

Closely observing jeepneys and memorizing every detail from tassels to aluminum hood, he came up with the “Jeepney Fantasia” series in 1989. His exhibit at the Ayala Museum drew rave reviews and sold well.

It was soon followed by other exhibits here and abroad.

But he admits introducing one’s art to foreign audiences is difficult. Getting accepted by the art community or an art gallery requires patience, he says.

Rejections may be as blunt as “It’s not our market. We don’t carry so much abstraction” or sugarcoated like “We are considering you but you have to wait for six months.”

No gallery says “Yes” right away, according to the artist.

“I am hoping that he or she will take my brochure or even browse it,” he adds.

For his “Nature’s Realm” exhibit at Chabot Fine Art Gallery in Rhode Island, Wilwayco submitted his application three or four years before his exhibit was shown. It was a chat with the gallery assistant director during an exhibit opening that helped seal the deal.

“If this brochure won’t merit your attention, I might as well throw it in the trash,” he recalls telling the gallery executive in jest.

The “line” worked and they had a brief chat. A week later she told him the gallery owner wanted to see his paintings.

Galleries, he explains, want to test first if an artist’s work will sell before he can exhibit.

Wilwayco says gallery owners pay rent and other expenses so they have to be sure an artist is bankable.

Art, Wilwayco says, makes him discover and “abstract painting leads to endless possibilities—things or images I have never imagined before.”

The Nueva Ecija-born artist has loved drawing since first grade. His father Nicodemus showed him how to draw cartoons like Batman.

The father seemed to know the eldest of his seven children would be a painter. He did not let his son chop firewood or carry heavy objects to protect his hands.

The family later migrated to the United States, petitioned by Wilwayco’s sister, a nun.

Although Wilwayco was hesitant, he and his wife decided it would be good for their daughter.

“To be exposed to another culture broadens your horizon, like when someone lends you a book,” he says. They left in 2009 but the artist comes home every year for exhibits.

Their first few years in Rhode Island were not easy, he says, as their apartment had little space for him to do his work.

Although the smell of oil spread throughout the complex, none of his neighbors, mostly senior citizens, complained.

Despite the cramped space, Wilwayco continued to paint. “I realized that when you love doing something, you keep doing it no matter what the circumstances are,” he says.

The family has now moved to a “huge apartment with high ceiling,” courtesy of Dr. Angelito Yango, a Filipino art collector who charges a low rate in exchange for a new painting every year.

Wilwayco says other fellow overseas Filipino workers (OFWs), like Yango, have been supportive of him, attending exhibits, buying his paintings and being there for him.

Some even flew to Singapore to support his “Recalibration” exhibit, billed by Lifestyle Asia as among the “five must-see exhibitions” in July.

He says his recent exhibit was a product of “self-introspection” and “fine-tuning” of past works.

“I am always recalibrating myself,” Wilwayco says.

This year, he painted “old”  subjects, like the jeepney and flags. “It’s my first time to paint flags since 1979,” he says.

The new versions are better. “It’s an evolution. I elevate it a little from the previous, in terms of texture, depth and tonal variation,” he says.

Wilwayco’s life and works will be featured in a book financed by his “No. 1 collector,” Robert Bjorn Santos, owner of Our Lady of Fatima University.

Last year, he was interviewed by author and art historian James Valliere, who wrote books on famed American painter Jackson Pollock. Valliere wrote in a review, “He (Wilwayco) is as creative as if he were the first artist to ever make an abstract painting.”

But Wilwayco not only graced galleries around the world with his artistry but also gave foreigners a glimpse of Philippine life.

J. Fatima Martins wrote in Artscope, New England’s premier art and culture magazine, “Much like the lush and spontaneous personality of his homeland—a place of dense beauty, a blessed temperamental Eden, always in a relaxed creative flux —Wilwayco is ready and open to inspiration.”

“Order and chaos, light and dark, heaven and hell, meet in his painting for a dynamic dialogue,” Martins added.

For Wilwayco, it is rewarding to hear people say, when his exhibits open, “Filipinos are great.”

Drawing from the twists and turns of his four-decade painting career, the US-based painter advises young artists to keep doing what they love despite rejections.

“If you get rejected, learn to move on and trust God to lead the way,” he says.

Wilwayco says he  begins each work with a prayer,  asking God for guidance, as painting is very mysterious.