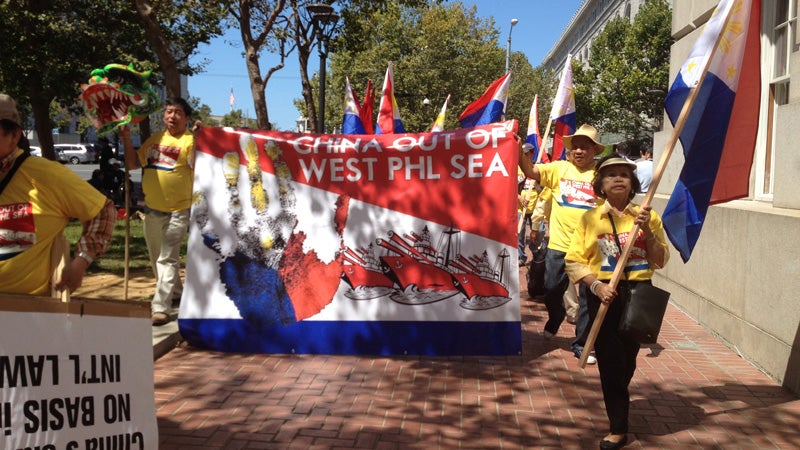 Rallyists march to San Francisco’s UN Plaza, calling for a stop to China’s incursions in the West Philippine Sea.

SAN FRANCISCO, California — Shouting “China out now!”, Filipino Americans in the Bay Area on July 24 joined their counterparts in other part of the United States and other capital cities in the world in denouncing what they called the invasion of the Philippines by China.

Carrying inverted Philippine flags, the San Francisco contingent marched to and around the United Nations Plaza with placards, condemning China for its alleged “bullying” tactics in dealing with the Scarborough Shoal conflict.

At a program detailing continued “harassments” against Philippine sovereignty, speakers denounced the Chinese government’s incursions in the disputed territory.

“We march with our Philippine flag with the red color on top as the Philippine is in distress because China is building a military base on Mabini reef with a mile-long air strip and a Marina for their ships to dock,” Rodel Rodis, President of US Pinoys for Good Governance (USPGG) told protesters.

“They could go all over the Philippines with the range of their rockets and their ships and this is a very dangerous development worse than if they set up oil rig,” Rodis added.

He explained that when China set up an oil rig in an island claimed by Vietnam, the Vietnamese erupted in anger and demonstrated against Chinese businesses in their country, forcing the Chinese to send back 3,000 of their workers back to China. Rodis urged Filipinos to do the same because what China is doing in the Mabini Reef is “worse than what they did in Vietnam.”

Mabini Reef is one of the contested islands and reefs in the West Philippine Sea that also include the Ayungin shoal, considered as the gateway to Recto Bank, which is 85 miles from the Philippine coast and was estimated by the U.S. Energy Information Administration to contain 213 billion barrels of oil and two quadrillion cubic feet of natural gas.

“Now we have to start getting the word out. In the Chinese consulate in Los Angeles, as in New York, Washington, DC, all over Canada, all over Europe and in capitals all over the world, Filipinos are organizing and mobilizing like us because we keep educating our communities to make sure that China does not invade the Philippines, to make sure that we are able to stop the intrusion,” Rodis announced.

With over 12 million overseas Filipinos all over the world, it is believed that Filipinos can mobilize and educate not only themselves, but also citizens of over 200 countries where Filipinos are based. 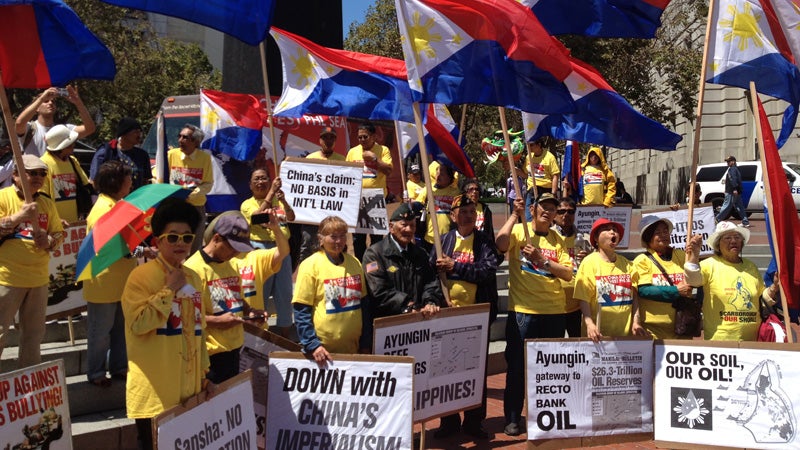 For his part, USPGG spokesman and legal counsel Ted Laguatan, reiterated his earlier call for the immediate destruction of the military bases that China has started to build.

“Once the bases are established, it is almost impossible to take them off, and we will become a slave nation. So we are urging the Philippine government, the US government, Australia and Japan to immediately destroy these bases, because if we allow them to be embedded there, they will threaten the national security not only of the Philippines, but also the neighboring countries Malaysia, Thailand, Vietnam , Indonesia, Saipan and so many other countries,” Laguatan explained..

He added, “There is a need for world condemnation to exert stronger pressure on China, which is acting like a rogue nation by not respecting international laws. We have informed so many in the world, we have turned public opinion against China in many, many ways. The more we inform people what China is doing, the more we gain in terms of having China condemned by world opinion.”

With his “battalion” of World War II veterans in tow, Rudy Asercion, executive director of West Bay Pilipino Multi-Service Center, insisted that the rallyists compel the United Nations to make a ruling on the Philippine case brought before the UN International Tribunal on the Law of the Seas (ITLOS), so that China may be stopped from building their military bases in maritime waters so important to commerce.

“We also call on Secretary John Kerry to see what is going on in the west Philippine Sea,” Asercion stressed. “We want the Americans to be aware of the infringement of China in our territorial rights in our sovereign waters. We have to make sure that America is knowledgeable about what is going on in the Philippine Sea and what is impeding international commerce in maritime waters China’s violation of Philippine sovereignty.”

While also commending the WWII veterans who joined the rally for making a stand that “no invaders shall trample upon our sacred shores” when they fought in Bataan, Corregidor and all over the Philippines, Rodis echoed Asercion’s appeal for the UN to rule that China’s “invasion of the Philippines” within the 200-nautical mile exclusive economic zone is illegal.

That decision should be issued now and not three years from now, Rodis asserted, “because by then China would have consolidated already its control over those islands,” in an interview later.

“Once we get the United Nations to issue a ruling that China’s invasion is illegal, it doesn’t matter if they don’t recognize it. It gives us a moral high ground, a basis to say (what) you are doing (is) something totally illegal (and) against the United Nations ruling.”

With the rhetoric in the rally was strong, protesters acknowledged that the Philippines is a small nation fighting a giant, as USPGG board member and treasurer Charito Benipayo described it.

“It is a big challenge since China is a very powerful nation. But Rome and the Tower of Babel, remember, also have fallen. In order to win this, we need to continue to get the support and awareness of the citizens of the world,” Benipayo stated.

Gazmin to activists: Why don’t you protest China incursions?