Gazmin to activists: Why don’t you protest China incursions? 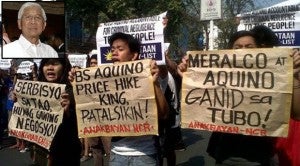 MANILA, Philippines—Defense Secretary Voltaire Gazmin on Saturday twitted activists for their silence on the country’s territorial dispute with China, while they loudly protest the Philippines’ new defense cooperation agreement with the United States.

Gazmin said the Department of Foreign Affairs was the government agency tasked with answering questions about the country’s moves to address the dispute with China over the Ayungin Shoal in the Spratlys.

But he could not help but wonder out loud why some Filipino activists were protesting the Philippines’ Enhanced Defense Cooperation with the US but were quiet when it came to the maritime row with China.

The Philippines will file a memorial, or a written pleading, on the West Philippine Sea territorial dispute with China before the United Nations Arbitral Tribunal on March 30.

China has refused to participate in the arbitration proceeding, insisting the dispute should be resolved bilaterally with the Philippines.

Last week, Chinese coast guard ships blocked a Filipino vessel on its way to Ayungin Shoal to deliver food supplies to the Marines stationed there.

The Marines are on a rusty naval hospital ship that was grounded on the shoal in 1999 to mark the Philippines’ territory.

The Agreement on Enhanced Defense Cooperation (formerly known as the Framework Agreement for Increased Rotational Presence) being hammered out by the Philippines and the US is widely seen as a deterrent to China’s increasing aggression in connection with its territorial claims in the South China Sea.

The working draft of the new security deal would allow for an increased US military presence in the country and access to the Philippines’ military bases. Philippine authorities, on the other hand, would have access to US facilities set up inside the local military bases.

Gazmin on Saturday said the Philippines and the US were working on the final details of the agreement.

US President Barack Obama is scheduled to visit the Philippines in April.