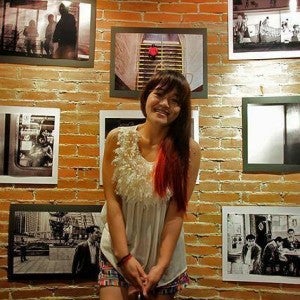 Documentary photographer Rick Rocamora does not even know how to pronounce her name. In fact, he and Xyza Bacani have yet to meet face-to-face, even though they’ve become key players in an inspiring story about Filipino photography that’s been drawing attention worldwide.

Rocamora, who is based in the San Francisco Bay Area, was surfing the site when he found on a photography group’s page compelling pictures of street life in Hong Kong.

He assumed at first that they had been taken by some rich Filipino kids based in Hong Kong.

But when he reached Xyza via email, she initially gave vague answers on what she was doing in Hong Kong. She told him she was a “mentor.” Only later did she become comfortable enough to disclose that she was a domestic helper working for an affluent Chinese family.

Rick understood her reluctance to be more open at first. “She didn’t know me.” Then there’s the stigma around being a domestic helper in a city like Hong Kong.

But the fact that she was DH made her work even more impressive to Rick. She immediately reminded her of Vivian Maier, the celebrated American photographer who worked as a nanny in Chicago and whose photos of that city, Los Angeles and New York later won critical acclaim.

It was Rocamora who led the New York Times to Bacani, whose journey from domestic helper to street photographer is now widely known.

Her story has been covered by Philippine media and those who want to hear more can catch her presentation this week. Bacani is giving a talk about her work on Saturday, July 26 at 2 p.m. at the Recto & Laurel Room, Second Floor of the Philippine Senate.

The person responsible for turning the spotlight on her story and work won’t be there.

“We’ve never met,” Rocamora told me. “This all happened through Facebook and the Internet.”

There are many more opportunities for Xyza’s work to reach a broader audience. Rocamora is helping her get funding for a documentary project on the abuses endured by Filipino and Indonesian domestic helpers in Hong Kong.

“The lessons from my career I’m sharing with her,” he says.

And it’s been an impressive career.

Rick is one of the most accomplished documentary photographers in the U.S. with a body of work covering a wide range of places and issues. His work documenting the plight of Filipino 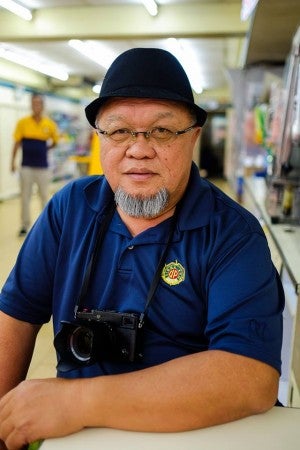 World War II veterans in the U.S. has won awards. He has photographed the plight of child prisoners in Manila and the conflicts in South Africa and Nicaragua.

His role in the rise of Xyza Bacani is, in a way, the next stage is Rocamora’s journey: to find new talented Filipino photographers who could continue the work of documenting the Filipino experience and those of other communities.

Rick has also been known for his generosity. I first met him in the ‘80s when I was a staff writer at Midweek, the small magazine edited by Pete Lacaba and Greg Brillantes. Rick donated an enlarger to the magazine.

Unfortunately, such generosity has not always been well-received. In fact, his efforts to help Xyza and to bring the works of other Filipino photographers to a global audience has drawn intense criticism from some Manila-based photographers.

But Rocamora maintains that “with digital technology and borders are more porous, there are many opportunities for the younger generation of Filipino photographers to excel and Xyza Cruz Bacani is a good example.”