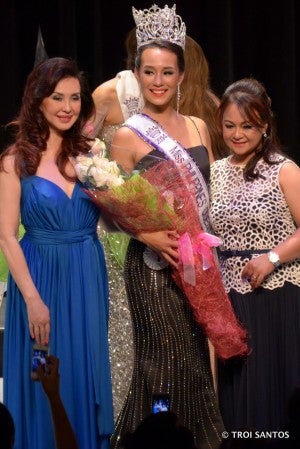 Kirby will represent the Filipino-American community in the 2014 Miss World Philippines pageant to be held in Manila on September 7.

She has won a round-trip ticket to the Philippines and an allowance of one thousand dollars. She will also wear a stunning evening gown, courtesy of One.10 Collection, during the Miss World Philippines competition.

During the dreaded Q&A, Kirby named young American actress-singer Demi Lovato, who has been vocal about her personal struggles, one of her personal women heroes. “She [Lovato] was able to overcome self-harm problems and is trying to help other people with similar problems to overcome it as well,” she said.

A recent graduate of Downington West High School in Pennsylvania, Kirby is a summer camp counselor. She is not new to beauty pageants having joined Miss Teen Pennsylvania USA and Miss Teen Philippines in the past.

In 2011, she was a dance scholar at Touch of Class Dance Studio in Pennsylvania. She also received community service awards twice from Kohls’ Cares for Kids, a volunteer program that supports children’s health and education.

The pageant was organized by Synergy Production and Marketing Inc., the franchise holder of Miss Philippines Quest USA in the East Coast, and Global Quest Inc. led by Miss World Philippines National Director Cory Quirino, who chaired the Board of Judges at the coronation ceremony.

“I’m very proud of these beautiful Filipinas that will ably represent the Fil-Am community in the Miss World Philippines pageant on September 7,” Quirino stated. “Starting next year, we’re going to widen our search to include the West Coast, Canada, Europe and Australia.”

Izza Dungca, creative director for the pageant said, “For the first time ever in the East Coast, a  beauty pageant this grand was staged. I’m proud of the achievements of the candidates. Their hard work and dedication paid off. It was an evening of surprises and I’m overwhelmed with the positive feedback from the Fil-Am community.”

“I’d like to thank Ms. Cory Quirino for inspiring me to do this pageant, and most especially for gracing our coronation night,” added Grace Labaguis, Synergy Production and 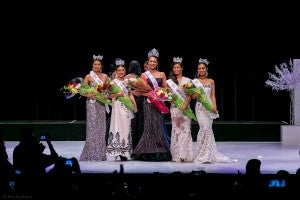 Marketing Inc. marketing director. “My love and best wishes to Alexa Kirby as she competes for the Miss World Philippines title in Manila this September.  Congratulations, and bring home the crown for the Fil-Am community in the East Coast.”

For three years in a row, the winner of Miss World Philippines has figured prominently in the Miss World pageant. Gwendolyn Ruais was crowned Miss World First Princess in 2011; her successor, Queenie Rehman, was among the semi-finalists in 2012.