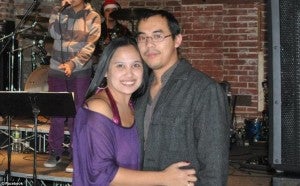 Lolabeth Ortega and Lord Balatbat of Jersey City, New Jersey died in a tornado that hit a campground in Virginia. FACEBOOK PHOTO

The storm slammed into the Cherrystone Family Camping & RV Resort, which sits on 300 acres on the Chesapeake Bay in rural Northampton County.

Virginia State Police Spokeswoman Corinne said in a press conference July 24,Thursday afternoon that a husband and wife, identified as Lord Balatbat and Lolabeth Ortega of Jersey City, New Jersey, were killed when a tree crushed their tent. Their son, who was in another nearby tent, was injured. The boy was taken to Children’s Hospital with life-threatening injuries.

Hospitals prepared for mass casualties, but they did not come. Injuries ranged from cuts to broken bones to life threatening, said Geller.

“I love thunderstorms and I went out to see it,” said Albert Thorn, of Monroeville, New Jersey. “There was a wall of grey — wind and rain. It was coming through the trees right at us. By then, we shut the sliding door and it was pounding them windows like you couldn’t believe. You could hear people screaming before it even got to us.”

When the tornado hit about 9 a.m., more than 1,300 people were at the campground which features swimming pools, mini-golf, pier fishing, crabbing and other activities.

“All hell broke loose,” said Joe Colony, a Stephensville, Maryland, resident who has been coming to the campground for 30 years. “We got an emergency message on a cellphone and within 30 seconds, the thing hit and it blew down 40, 50 trees in the park.”

Larry LeMond, chairman of the Northampton County Board of Supervisors, said a local high school would be used as a shelter for those who had nowhere else to go. Churches and other groups donated food and clothing. Weekends would typically draw 2,000 people to the campground, he said. 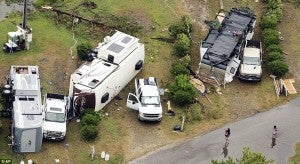 “In the summertime, it’s the biggest town on the shore,” LeMond said.

The National Weather Service issued a tornado warning for the area about the time it struck. Many at the park said they had only a few minutes of warning.

“The people who were in their tents had no chance to get out of their tents to go for shelter,” said Tori Thomas, of Monroeville, New Jersey, who was staying in a cottage with her two children, ages 1 and 3.

Joe Micucci said he and his wife rode out the storm in their camper as softball-sized hail fell.

“We saw at least five (campers) that were flipped over. One was completely gone and only had its wheels left,” said Micucci, of Washington Township, New Jersey.

Eastville volunteer firefighter Brittney Eder said she left the campground before the full force of the storm hit.

“It came in real quick,” she said. “The sky turned jet black.”

Eder said she left the campground before the full force of the storm hit. Eder’s father, Fire Chief David Eder, told her from the scene that the storm downed trees and flipped at least two campers.

Brian Coy, a spokesman for Gov. Terry McAuliffe, said the administration was closely monitoring the situation and had received reports of severe damage at the campground with trees on top of campers.

Peter Glagola, spokesman for Riverside Shore Memorial Hospital, said the hospital treated more than two dozen people. One patient in critical condition was flown to VCU Medical Center in Richmond, he said. Most at Riverside had been released, according to state police.

Across the country in Spokane, Washington, severe thunderstorms knocked out power to more than 60,000 customers and damaged dozens of homes Wednesday. One driver suffered life-threatening injuries when a tree slammed onto his car, impaling him. Severe thunderstorms were forecast for the northern Plains on Thursday and could threaten the Deep South and mid-Atlantic.