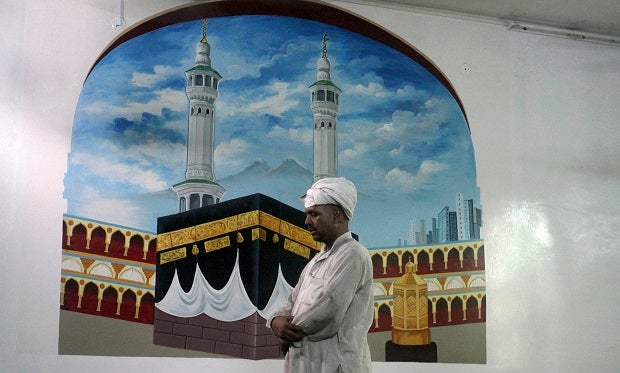 A Pakistani offers afternoon prayers in front of a mural depicting the Kaaba and the Grand Mosque in Mecca, Saudi Arabia, during the Muslim holy month of Ramadan, at a mosque in Lahore, Pakistan, Monday, June 30, 2014. Muslims throughout the world are marking Ramadan–a month of fasting during which observant Muslims abstain from food, drink and other pleasures from sunrise to sunset. Ramadan is meant to be a time of reflection and worship, remembering the hardships of others and being charitable.  AP

MANILA, Philippines — The Philippines urged its large Muslim minority on Thursday to reconsider plans to join pilgrimages to Saudi Arabia this year due to a deadly virus outbreak there.

About 6,500 Filipinos who are set to join the annual Hajj pilgrimage in October are being urged to go next year instead, when the Middle East respiratory syndrome (MERS) is expected to be under control, health department spokesman Lyndon Lee Suy said.

“We know it’s a religious custom, but it is also our duty to provide health advisories,” Lee Suy told AFP.

“It’s an appeal for them to delay the trip if possible due to the MERS virus…. If possible, they should go next year.”

Millions of pilgrims visit holy sites in western Saudi Arabia, the country worst hit by the disease, for the annual Hajj, the major Muslim pilgrimage that this year will take place in October, and for the Umrah, which is performed throughout the year.

The World Health Organization said last month that the surge in MERS cases has receded, but countries must maintain vigilance for the Muslim pilgrimages to Saudi Arabia.

MERS has killed at least 284 people in Saudi Arabia since it first emerged in April 2012, and hundreds more have been infected, with 22 countries having reported cases.

At least two of the dead in Saudi Arabia are Filipinos, according to the Department of Foreign Affairs.

While Filipino Muslims customarily seek to undertake the Hajj at least once in their lifetimes, Lee Suy said a number of them make it a point to make the pilgrimage every year.