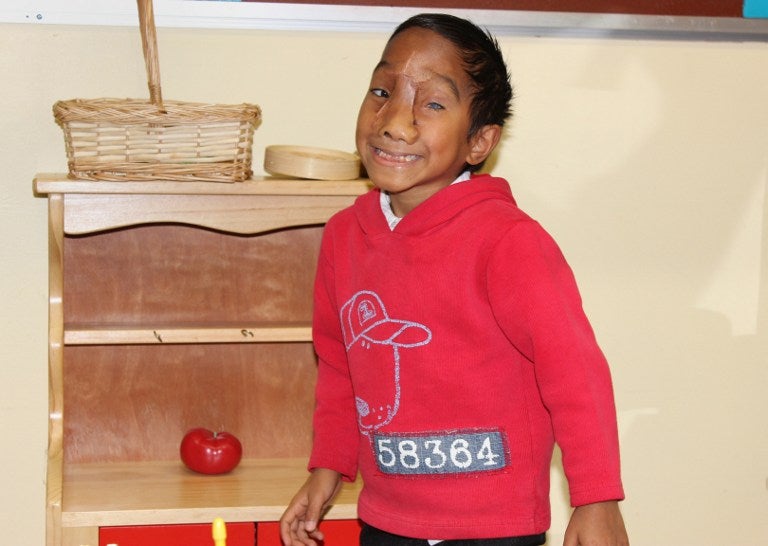 This undated handout photo released on July 3, 2014 by Monash Childrens Hospital in Melbourne shows seven-year-old Jhonny Lameon from the Philippines after having surgery to remove a huge tumor from his face. AFP

SYDNEY — Australian surgeons have successfully carried out a complex and rare procedure to remove a huge growth from the face of a young Filipino boy, who had to lift it up to eat and drink.

Jhonny Lameon, 7, suffered from a severe fronto-nasal encephalocele — a neural tube defect that resulted in membranous sacs expanding through his eyes and covering his face.

He was noticed by a volunteer at NGO Interplast during a visit to the Philippines, who sent photos of the child to Monash Children’s Hospital plastic surgeon James Leong in Melbourne.

“As soon as I saw his case I immediately sent emails to get approval so we could help this young boy,” Leong told AFP.

Interplast teamed with the Children First Foundation to bring Jhonny to Australia, as the type of surgery he needed was not available in the Philippines and was out of reach for his impoverished family.

Leong said the condition was rare, with about one in 10,000 babies born with the defect. In more developed nations, the condition is usually picked up and corrected early. 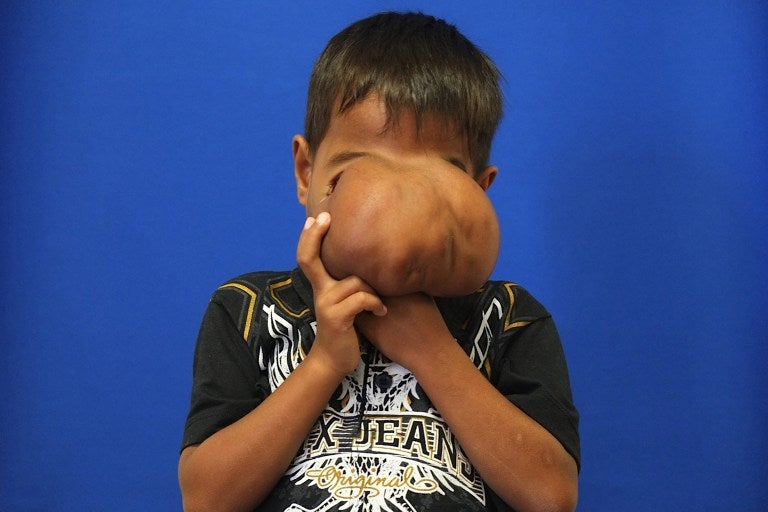 This undated handout photo released on July 3, 2014 by Monash Childrens Hospital in Melbourne shows seven-year-old Jhonny Lameon from the Philippines before surgery to remove a huge tumor from his face. AFP

A team of four surgeons, who all volunteered, performed an eight-hour operation to remove the mass and reconstruct Jhonny’s entire face in March, with the hospital revealing news of the case on Thursday.

“Jhonny’s case was quite severe. The surgery was quite complex,” said Leong.

“We were able to excise the tumor, and reconstruct the face by breaking the bone between the eye sockets. We also took a rib graft to reconstruct a nose for Jhonny.”

The boy has been recovering at a rehabilitation center north of Melbourne and Leong said he was a bundle of energy and now able to live like other children his age.

“Jhonny referred to the tumor as ‘the ball’ and it made life very difficult for him. He was ostracized and teased and had to hold the tumor away from his face in order to eat or drink,” Leong said.

“He still wanted to run and play like any other little boys but ‘the ball’ made this almost impossible.

“We feel privileged that we have an opportunity to change this little boy’s life, and we hope Jhonny’s quality of life will improve considerably.”