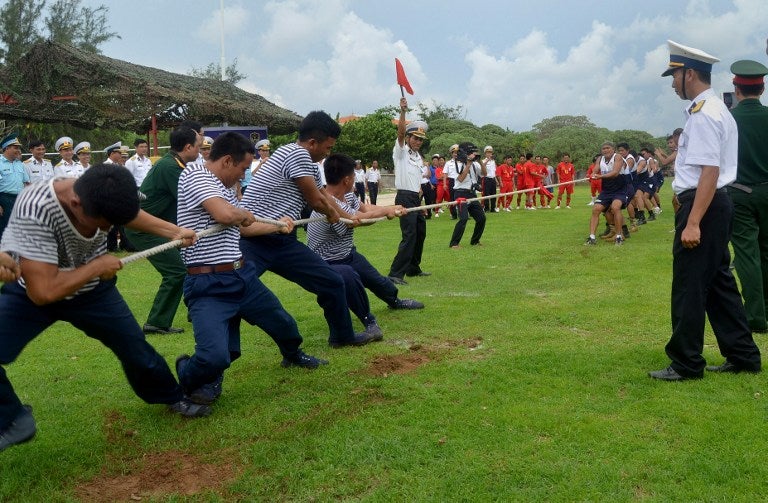 Members of the Philippine (back R-in white) and Vietnamese (L-in stripes) navies taking part in a tug-of-war game during a day of friendly games and cultural exchanges on June 8 on the contested islands in the Spratlys archipelago in the South China Sea. AFP/Philippine Navy

The visit came more than a month after Vietnamese Prime Minister Nguyen Tan Dung paid a state visit to the Philippines.

“On a bilateral basis, the two ministers discussed a wide range of issues and agreed  to further promote cooperation in many areas such as fisheries, ocean and maritime defense and security, trade and investment,” a Department of Foreign Affairs statement said.

It said the two officials agreed to establish a joint commission “to formulate a road map in working towards a strategic partnership.”

Del Rosario and Minh also shared their views on the rising tension in South China Sea, agreeing that it should be addressed through peaceful means and in accordance to international law.

The DOC was an agreement signed by the Association of Southeast Asian Nations  with China in 2002. It expressed the parties’ commitment to the United Nations Convention on the Law of the Sea (UNCLOS), among other international agreements. It also reaffirmed the freedom of navigation in the area and the peaceful resolution of territorial disputes.

Meanwhile, the COC is a renewed attempt to create binding code among Asean member states and China.

Last month, anti-China protests erupted in Vietnam, resulting in the burning of some factories and evacuation of Chinese workers in the country.

Both the Philippines and Vietnam have complained against China’s action concerning disputed areas in the South China Sea.