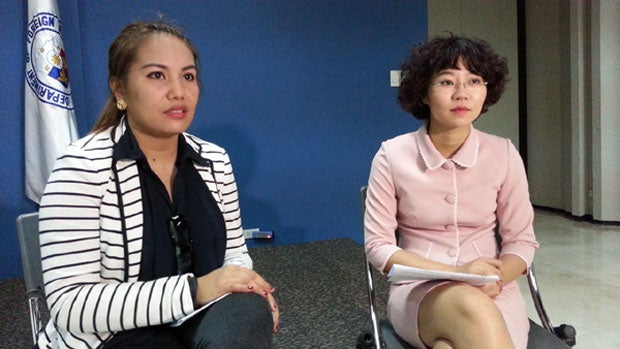 Janicee Buco (left) and Amber Lee (right), representatives of Philippines and Vietnam in the Vietnamese-Filipino Association, call on other ASEAN countries to unite and stand up against China’s bullying as they prepare for a protest rally at the Chinese Embassy Friday. MATIKAS SANTOS/INQUIRER.net

MANILA, Philippines—An association of Vietnamese and Filipinos joined together to call on other Association of Southeast Asian Nations (Asean) countries to band together and stand up against China’s bullying.

“We would like to call on China to stop bullying Vietnam and Philippines and respect the law of the sea,” Janicee Buco, Philippine representative of the Vietnamese-Filipino Association, said in an interview Thursday.

“We would like to call on other countries to support us, Philippines and Vietnam are small countries so if we are divided, China can dominate us, it’s better if we are united in standing up to China,” she said.

The Vietnamese Filipinos Association is set to hold a rally at the Chinese Embassy Friday to protest the recent deployment of an oil rig near the Paracel Islands that is within Vietnam’s 200 nautical mile exclusive economic zone.

Vietnamese vessels had engaged several times with Chinese escort ships in order to prevent the oil rig from getting to its destination.

Amber Lee, the Vietnamese representative of the association, said that if China can dare to deploy an oil rig in Vietnamese waters, it can do the same to other countries that are affected by China’s nine-dash line claim.

“We would like to call for the support from the Philippine and other Asean countries because if China can deploy the oil rig in the sea of Vietnam, [it] can deploy anywhere in the nine-dash line that [it has] claimed and that will not be good for everyone,” she said.

“We would like all the nations to come together so that China cannot just do anything that [it wants]. [It has] weapons, [it has] guns, [it is] a very strong economy but what it is doing now with [its] neighbors cannot be accepted,” Lee said.

The Philippines has previously filed an arbitration case before the International Tribunal on the Law of the Sea (Itlos) against China’s “excessive” claim in the entire South China Sea.

Some 200 members of the group will join the rally on Friday at the Chinese Embassy and Filipinos have been urged to join to bring a strong message against China.

“We just want to show to government of China that what [it is] doing now in the sea of Vietnam is wrong and [it] should stop that,” Lee said.

PH has backing of Vietnam, Malaysia vs China’s sea claims