Filipino is ready to take on world’s toughest foot race 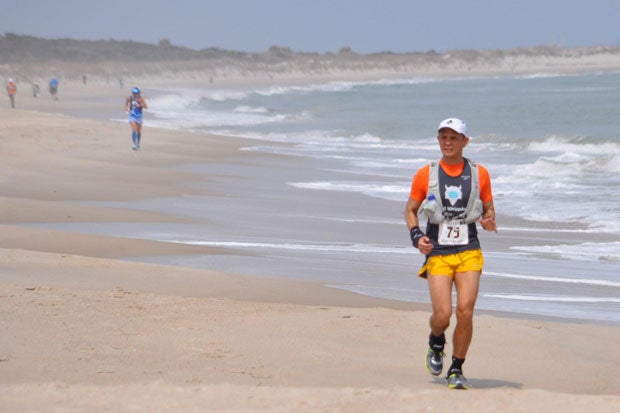 • 135-miler in blistering heat will be grueling

• Professional chauffeur has finished 26 ultramarathons before

NEW YORK—Five days a week, Gerald Tabios’ mode of transportation to work is the feet he runs with.  It allows him to be upright for a total of 40 to 50 miles a week, in stark contrast to his daily work, 10 to 12 hours hunched in a car as the professional chauffeur of a wealthy Park Avenue socialite for the past seven years.

Tabios takes both his work and running seriously. Being a chauffeur, he can’t talk for long on the phone, excusing himself all the time; while the only running he knows is the long and epic variety. He has completed 24 marathons (four 100-milers, two 48-hour), including 10 years of the New York City Marathon.

He has also completed 26 ultramarathons in 12 states—the longest of which was 143 miles.  He finished all these races, but there’s nothing like completing the toughest, most demanding and extreme footrace of all – the Badwater 135. Tabios was accepted among 100 of the toughest athletes: runners; tri-athletes; adventure racers.

On July 21 to 23 then, Tabios, 44, hopes to become only the second Filipino to “survive” Badwater 135 after Benjamin Gaetos, 56, last year. Tabios, a resident of Elmhurst, Queens, for the past 13 years, has come a long way from his early days running in his beautiful hometown of Malaybalay, Bukidnon (elevation: 2,041 feet).

The distance he needs to cover will be the same: 135 miles. The weather: blisteringly hot, 129F (49C), possibly even hotter as previous temperatures have reached 133F.

Tabios is up to the challenge. Recent runs this month have been encouraging. He won the ultramarathon at Lake Waramaug in New Preston, Connecticut. He also placed 10th in the Great New York 100 Mile-Times Square, where he clocked in at 21:22:34.

Why is he doing it?

“Because it’s there,” says Tabios, borrowing the line from British mountain climber George Mallory, who said it when asked why he wanted to climb Mt. Everest in the 1920s.

People may think running in these tough conditions is crazy, but Tabios is fearless, smiling as he says nonchalantly, “I love the challenge and (going) the distance.”

So how does his mind function when running? Because he is not one to accessorize (no iPods, only sunglasses for sun protection), Tabios says he thinks a lot when running. “When I run, it’s just me, my thoughts and nature.”

He doesn’t think about pain. “Your mind can plays tricks on you. It tells you to think of pain, so you will stop, but pain could just be muscle pain. Pain is all in the mind. I know the difference between pain and injury,” he says.

By running, the 5’8 ultrarunner says he has become a more patient person—healthier even. From 177 pounds, he’s down to 148 pounds.  He has also chosen a charity, a donation site for the victims of Typhoon Haiyan through UNICEF.

“I believe this (Badwater race) is of great importance as well as a chance for me to collaborate with a charity,” he says. The deadliest typhoon to hit the Philippines killed over 6,000 people. Visit https://www.crowdrise.com/unicefphilippines/fundraiser/geraldtabios

“Only training you need is running,” he explains his physical conditioning.  On weekends when he’s not competing, he runs 15 to 20 miles. To condition his body for the elevated temperatures at the foot race location, he goes to the sauna. He says he never runs on a treadmill.

The night before he runs, Tabios is going to eat the same way he did in other races. “Mainly carbohydrates, as I stay away from fibers, if you know what I mean.”

Pacing is important. To survive this 48-hour race, he must relax his legs, elevate or oxidate his them for 10 minutes. “Yes, there will be a bathroom break.”

In previous races, Tabios would take GU gels every 45 minutes or so. “I take salt caps (electrolyte pills) every hour, depending on my sweat or heat during the race.” He also drinks a high protein and calorie supplement every 9 or 10 miles. “You need complex carbohydrates or foods that help you sustain and release energy over time.”

Like everyone else in this epic race, Tabios will also have a crew. It will consist of his wife, Donna, older brother, Glen, who is flying in from the Philippines, friend Kat Bermudez and a registered nurse. “My parents-in-law are also coming here from the Philippines to take care of our two kids (at home in Queens),” he says.

This is not just any other run for Tabios. He is not just putting on shoes and taking off to pass Queensboro Bridge on his way to his daily work on Park Avenue. It will be his first West Coast trip as well. And to make this ambitious undertaking a reality, his shoes may not be the only items burning a hole against the unbearable heat, his pocket will as well.

Tabios is spending upwards of $3,000. He paid nearly $1,000 for registration and more than $2,000 for the travel expenses, van rentals, hotels and equipment, and daily expenses. He is not even in it for the prize, a belt buckle, with no cash prize. He simply wants to finish the world’s toughest foot race. Is that too much to ask for?

What went wrong in Ballet Philippines?