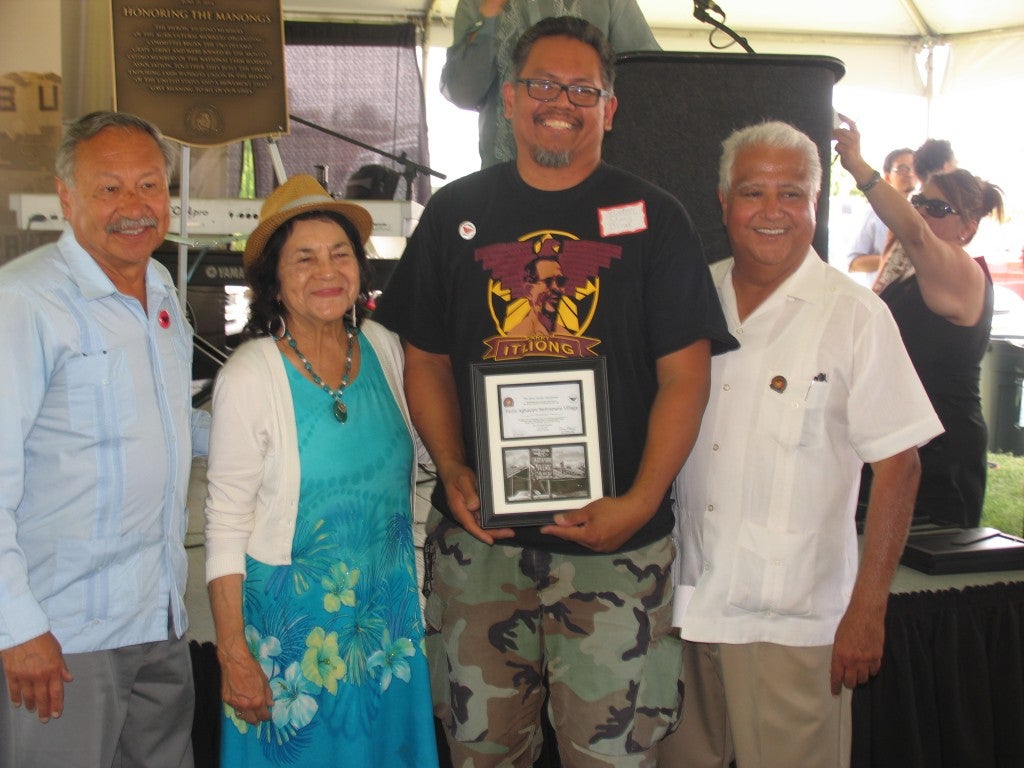 DELANO, California – In this slow-paced agricultural community at least 150 miles north of Los Angeles, an important event marked June 21, as far as Filipino American leaders and the descendants of Filipino farm laborers are concerned.

For the first time, many of the community leaders and students who braved the 105-degree heat heard the United Farm Workers’ (UFW) contemporary leaders declare publicly:  “The Great Grape strike of 1965 was initiated by the Filipino farmers or the “manongs of Delano.”

The event where this recognition was declared, was the 40th anniversary of Agbayani village, now held as a national treasure. The retirement complex was named after the Delano Grape striker “Manong Paulo,” who died from heat exhaustion in 1967 while picketing the Pirelli-Minetti Winery in Delano.

“At first it wasn’t in the plans of Cesar and Dolores Huerta,” both icons of the labor movement, to initiate a strike in 1965, but after studying the Filipinos’ proposal to launch a strike in the fields Chavez yielded.  Cesar gave full credit to the Filipinos for starting the Great Delano Grape Strike,” said UFW President Arturo Rodriguez in his speech.   Chavez’s son Paul, director of the Cesar E. Chavez Foundation agreed.

In response to this recognition, the son of leader Larry Itliong, Johnny, called on UFW to change its website to clarify that Chavez and his group did not solely form the powerful union.

The younger Itliong has been kept busy in the last few years speaking to groups, mostly students, on the work of the manongs that led to changes in the working conditions of all farmers in the U.S.  He joined other Filipino leaders and former Delano farm workers in an afternoon special commemoration of the Agbayani village.

More than 500 attendees of the UFW-sponsored morning event huddled in a large beige event tent. Attendees came from Connecticut, Nevada, San Diego, San Francisco and Los Angeles. Many were relatives of the Delano manongs, known as a formidable backbone of the farms of central California.

Others were former students in the ‘70s who came to help build the village alongside the farmers and longtime Filipino advocacy groups.

A few others tilled the soil of Delano themselves during their childhood, side by side with their parents (before the child labor laws were put in place), including Johnny, Lorraine Agtang, first manager of the Agbayani Village and MaryJane Galviso, owner of Ilokano farms, among others.

They all knew the historical facts because they were there.  Most of them received “anchor awards” from the UFW for volunteering to help in Agbayani building efforts in the ‘70s.

Dolores Huerta, a close ally of Cesar Chavez was among the speakers, explained the importance of the building efforts. “Agbayani Village symbolized the movement’s highest regard and recognition of the Filipino farmers; it provided a place for the Filipino immigrant workers who had no relatives, no pensions to rely on,” she said.

Huerta remembered being part of a sit-in at a Planning Commission meeting in Bakersfield to get the necessary permits to build the village.  “At that time, some discrimination was going on; eventually the permit was granted.”.

Yet, what has been the subject of protests and compelled a Filipino conference in the afternoon was the continued lack of mainstream knowledge of the important role of the manongs in the improvement of conditions of all farmers.

The second equally important afternoon event was held at the nearby Delano Filipino Community Center on Glenwood Street, not only to celebrate the Agbayani Village’s historical importance, but also explore actions towards achieving visibility and political clout. 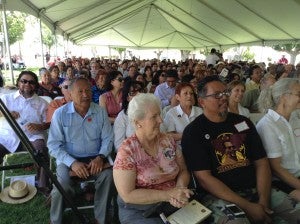 Many of the attendees in the afternoon event had seen the film “Cesar Chavez” and were concerned about the film’s marginal treatment of Larry Itliong’s leadership in the Great Delano strike. Facilitator Steve Arevalo told a gathering of advocates and history buffs that he sent out 250 letters to protest the historical inaccuracies in the Chavez movie, including some addressed to UFW officials.

A political strategist based in San Jose, Arevalo cited that “it is in this very hall where the signing of the contract between Itliong-Chavez’ group and the growers for better conditions, took place.” How can the movie eliminate Itliong from that historical scene, and despite that his signature appeared with that of Chavez’!”

It was also an afternoon of reminiscences.

“I was 12 and sitting on the fourth row of chairs at this Hall when my father Mariano Laya “Bob” Armington, who was the foreman of the George Lucas ranch, presented a motion to strike on that September day,” said law professor and administrative Judge John Armington, son of a Filipino mestizo.

“After the votes came in, my father blew the horn signifying strike at noon on September 8 and in three hours this hall was filled with people who had left their grape harvest in crates at 108 degrees laying on the ground.  In the following days, donated food came from all over to support the strikers – I have never eaten so much corned beef in all my life!,” he recalled.

“Where do we go from here?,” Mark Pulido, the first Fil-Am mayor of Cerritos, California, asked a speakers panel composed of  sons and daughters of Delano who had witnessed the events of the Delano strike and the beginnings of UFW. 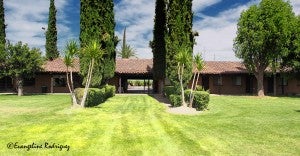 Pulido was a student in UCLA when he co-founded with his sister Marissa Pulido Rebaya, the Agbayani Village Pilgrimage Organizing Committee, on the Centennial of Philip Vera Cruz’s birth in December 2004. “I was only 5 years old when it was dedicated on June 21, 1974.

My connection to the Manongs and Agbayani Village was when I first met Manong Philip Vera Cruz as a freshman at UCLA in 1987 and developed a very close relationship until his passing in 1994. I continued visiting Delano annually to this day,” Pulido told Inquirer.net.

Civil rights attorney Tamayo was already a law student when he  participated in “two building brigades in Agbayani” in the early ‘70s. A leading litigator for the federal agency, Tamayo said work in the village “opened our eyes to the important contributions of these early immigrants to the U.S. labor history.”

Marisa Aroy, producer of the highly acclaimed “The Delano Manongs: Forgotten Heroes of the United Farm Workers, “ who earlier in the day presented the film to UFW and guests, joined the second event.  Aroy grew up in nearby Bakersfield, which is also a huge farming community. Her film will be shown on PBS.

Rodel Rodis was teaching when he learned about the “manongs,” their strike and the building of Agbayani village in the ‘70s.    The movement inspired him to lead his students on weekend trips to the camps in Delano where some of the farmers were housed.

“The students got to meet Philip Vera Cruz and brought us to the camps of the still living manongs and we would have conversations about their experiences,” Rodis remembered.

Earlier Paul Chavez, son of Cesar and head of the Cesar E. Chavez Foundation, recognized the “anchor crew,” volunteers in the building of the village through an award ceremony.

More than 70 received the awards including Filipino leaders Tamayo, Cas and Jennifer Tolentino, INQUIRER.net reporter Florante Ibanez, among others.   Among the celebrants to the 40th Anniversary of the Agbayani Village were Congresswoman Judy Chu, D-Monterey Park, then a UCLA student inspired by Delano strikers’ struggles to come help them in building the village.

Among the plans generated by the second event was following up on the status of AB 123, now a law signed in October by Governor Jerry Brown, to re-writing California textbooks for 7th to 12th graders to reflect the important role of Filipino farmers in the US farm and labor movement The new law states that pupils must be instructed about the influence of Filipino Americans and their culture on the farm labor movement.

Read Next
US mayors unanimously back Net neutrality
EDITORS' PICK
Villar Group gears up for AllValue Shopping Party on Dec. 3; around P 1-million promos and discounts up for grabs
Gov’t eyeing COVID-19 vaccine booster for essential workers, indigents by Dec. 10
PH logs 665 new COVID-19 cases, lowest since July 2020
Omicron poses ‘very high’ global risk, countries must prepare–WHO
Legarda: Ending Violence Against Women, a cause for all
A delightful blessing!
MOST READ
Quiboloy warns of ‘much worse than Omicron virus’ if his ‘persecution’ is not stopped
Bongbong Marcos’ conviction in tax case not a crime involving moral turpitude — lawyer
Omicron poses ‘very high’ global risk, countries must prepare–WHO
Marcoleta defends pol ads on ABS-CBN
Don't miss out on the latest news and information.