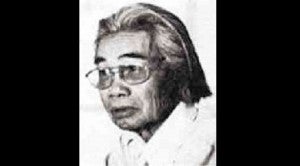 In 1977, the dictator Ferdinand Marcos scored an incredible propaganda victory.

That year, a revered Mexican American icon, a legend in US civil rights history, visited him in Manila and endorsed one of the most corrupt rulers in history who was then also notorious for gross violations of human rights.

You won’t hear about that part of Chavez’s life in “Cesar Chavez,” the new film about his life and times.

And you also won’t hear anything about Philip Vera Cruz, the Filipino American leader who helped build a powerful movement under the slogan “Si se Puede,” but who, outraged by Chavez’s embrace of a dictator, essentially said, “No se puede.”

In 1987, Vera Cruz told the San Francisco Chronicle’s Lisa Chung how Marcos and his allies “were trying to use Cesar. To be a guest of a president, a head of state, was kind of an honor (for Chavez), but that ruined him.”

In 1993, Vera Cruz told Filipinas magazine, “Cesar’s trip to a dictatorship was in direct contradiction to those principles we stood for.”

He was even more bitter in his memoir.

“What Cesar did there in the Philippines is the saddest day in the history of the farm workers movement in this country,” he wrote. “It was a disgrace. Chavez was toasting Marcos with all those phony labor leaders appointed by Marcos at the presidential palace while, at the same time, the real union leaders were in jail.”

Vera Cruz eventually broke with Chavez and the United Farm Workers (UFW), but he continued to speak highly of him.

That was not surprising. Chavez was an exceptional union leader who played a key role in the US civil rights movement. But like other civil rights icons, including Martin Luther King and Malcolm X, he had his flaws.

The meeting with and his endorsement of Marcos was a gross miscalculation. Chavez, it is said, listened to Filipino union leaders within the UFW who painted Marcos as a friend of the farm workers movement and convinced him that endorsing the tyrant would help strengthen the UFW’s support among Filipinos.

For some puzzling reason, he overlooked what even then was Marcos’s clear record as a despotic ruler and ignored the advice of other Filipino leaders led by Vera Cruz.

It was a major political blunder, but one that should not overshadow his contributions to the fight for civil rights in the US.

Something else got overshadowed in “Cesar Chavez,” the movie: the important role Filipinos played in creating and leading the UFW. That point got pretty much got obliterated in the Diego Luna film.

There are brief references to the Filipinos launching the defiant strike in Delano that eventually led to the full-blown workers protest now that paved the way for the creation for the UFW. As the Filipino American National Historical Society said in a statement:  “The filmmakers erased Filipinos from key moments in which archival and photographic evidence show the opposite.”

Here’s another way of looking at “Cesar Chavez,” the movie: it’s like “Star Wars” minus one central character.

You find the heroes like Chavez as Han Solo. Dolores Huerta as Princess Leia. A Filipino-American, Larry Itliong, got some screen time, but he was reduced to a few lines and several reaction shots mainly to affirm Chavez, turning another a major figure in US farm worker history into an Asian sidekick, Jar Jar Binks or Chewbacca.

But the worse offense is the desaparecido status of Obi Wan Kenobi. That’s Vera Cruz, the grand old man of the farm worker movement.

The film dramatized the historic UFW pilgrimage from Delano to Sacramento, showing Chavez enduring the long trek with the courageous farm workers.

Well, Vera Cruz also was part of the 25-day trek, even though he was by then an old man in his early sixties, a veteran of decades of farm worker struggles, who marched shoulder-to-shoulder with much younger activists, including Chavez who was then in his late thirties.

“I was willing to die for the cause,” Vera Cruz, who served as a vice president of the UFW, told Chung of the San Francisco Chronicle.

In an ironic twist, Luna, in promoting his film recently said, according to Matt Garcia’s brilliant review in Smithsonian.com, “We have to send a message to the [film] industry that our stories have to be represented. And with the depth and the complexity they deserve.”

Apparently, he could not spare enough “depth and complexity” to cover Vera Cruz and the other Filipino leaders.

Another irony is that the film, the first major mainstream depiction of the great farm workers strike, came out shortly after California passed a law that seeks to educate school children on the contributions of Filipinos to that struggle.

Fortunately, a new documentary by Marissa Aroy, “Delano Manongs,” which highlights the role of Filipinos, has just come out.

Certainly, Cesar Chavez the movie is cause for celebration in the Mexican American community, which has historically been misrepresented, even ignored, in mainstream American culture.

But as my friend Lloyd Nebres said in a post responding to a Latina friend’s comment on the significance of the film: “The actual history of minorities in North America is already marginalized, as it were. Those of us retelling the story from our point of view should not, in turn, elide the notable contributions of anyone involved in that history.”

It’s a shared history from each community can learn so much from the other.

And this isn’t just talk.

In the early ’90s my wife Mara Torres helped form Teatro ng Tanan, one of the first major Filipino American theater companies in the Bay Area.

One of the groups the company turned to for guidance was El Teatro Campesino, the Mexican American company born on the picket line in Delano during the 1965 strike, and considered a pioneer in grassroots, community theater.

It speaks to what Cesar Chavez once said: “Preservation of one’s own culture does not require contempt or disrespect for other cultures.”