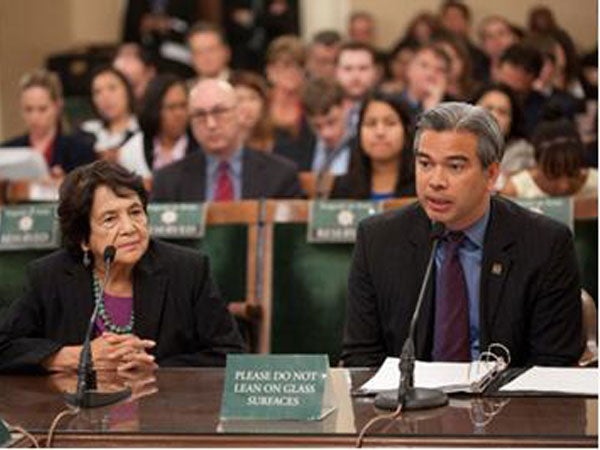 SACRAMENTO, California—Governor Jerry Brown on Wednesday signed into law a first-of-its-kind bill requiring the state curriculum to include the contributions of Filipino-Americans to the farm labor movement in California.

Assemblymember Rob Bonta (D-Oakland), sponsor of AB 123, noted that Brown’s signing of the bill is the perfect way to celebrate the beginning of October, which is Filipino American History Month.

“The goal of AB 123 is to supplement California’s rich farm worker history with the contributions of the Filipino-American community,” explained Bonta, the first Fil-Am elected to the California legislature.

The Filipino-American population is the largest Asian population in California and continues to grow “yet the story of Filipinos and their crucial efforts to the farm labor movement is an untold part of California history,” Bonta added.

Bonta cited the contributions of farm worker leaders such as César Chávez and Dolores Huerta, and that “generations of people who follow their stories have benefited from their commitment to social and economic justice in innumerable ways.”

However, missing from the current curriculum are events such as the Delano Grape Strike of 1965, led by the Agricultural Workers Organizing Committee (AWOC), made up of first-generation Filipino leaders (Philip Vera Cruz and Larry Itliong).

“By signing AB 123, Governor Brown has made an unprecedented move to give students a more complete account of California’s farm labor movement and ensure that these important leaders, such as Philip Vera Cruz and Larry Itliong are remembered by future generations of Californians,” explained Bonta.

Dolores Huerta, an iconic social justice and labor rights activist, spoke in support of the bill in committee: “The students of California need to learn that the sacrifices made by both the Filipino and Latino workers benefited all Californians. AB 123 will ensure that the history is taught accurately.”

The bill is particularly important to Bonta because of his personal heritage and history. Bonta was raised as a child in La Paz, the United Farm Workers’ headquarters, where his parents organized Filipino-American and Mexican-American farm workers.

Also, as the first Filipino-American elected to the California State Assembly and the godson of José Gomez, executive assistant to César Chávez, Bonta has committed himself to the cause of farm workers and ensuring that the legacy of the farm workers is properly taught to the children of California.

Bonta concluded, “I am proud that Governor Brown recognizes the contributions of Filipinos to the history of our state and country by signing AB 123 and including them in the history and social sciences curriculum taught in California schools.”