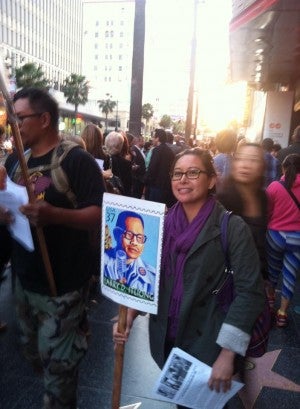 Filipinos picket Chavez at the Mann’s Chinese Theater in Hollywood.

One event saw a sold-out crowd on Sunday March 23 fill the New Parkway Theater in Oakland in the premiere of the 30-minute documentary, “Delano Manongs,” directed by Marissa Aroy.

The film was a highlight of CAAMFEST 2014, an 11-day celebration of Asian American artists who made significant benchmarks in history. “Delano Manongs” is also filmmaker Aroy’s entry to the 2014 Los Angeles Film Festival in May.

The other event, in Los Angeles, on March 12, saw a picket line, including not only Filipino Americans but also Latinos, waiving huge posters of farm worker leader Larry Itliong, along Hollywood Blvd., across the red carpet of Mann’s Chinese Theater, where  Luna’s “Chavez” was being premiered.

“Delano Manongs,” based on old photos and “films from the agricultural lands” is a factual depiction of the primary role of Filipinos in the successful “Great Delano strike of 1965,” which improved the conditions of farmers in the U.S., from establishing fair wages to securing medical plans.

It shows the leadership of Larry Itliong who was the assistant director of the United Farm Workers Organizing Committee, the right hand man of Cesar Chavez.

In contrast, the Hollywood movie “Chavez” shows Itliong “not as the militant, older sage and equal of Chavez, but a silent sidekick in awe of the main character,” said artist-muralist Eliseo Silva and one of the picketers in Los Angeles.

Historical “inaccuracies” in “Chavez” led Silva and others to the March 12 picket. “That movie’s narrative perpetuates the myth that Cesar Chavez was a one-man movement,” said Silva. “This is very unfortunate, because Cesar Chavez’s greatness lies in his ability to bring people together, despite so many ‘cooks in the kitchen’.”

Silva explained that by avoiding the “elephant in the room,” which is the significant role that Filipino Americans played in the farm labor movement, “the film suffers immensely and loses the rare opportunity to truly honor a great man (Chavez), who was a hero for all Americans, not just Chicanos.” 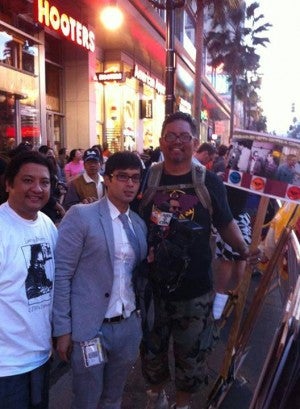 “Larry Itliong and Cesar Chavez were equally marching side by side, unlike how it was portrayed in the film, where the lone representation of the Filipino American contribution is a Philippine flag being held by a non-Filipino,” protested Silva. Darion Basco, a Filipino American actor, plays Larry Itliong in the Hollywood film.

Larry Itliong’s son, Johnny, told INQUIRER.net, “One of the movie’s gross misrepresentations of facts is a scene depicting the signing of the contract outlining reforms resulting from the Great Grape Strike of 1965.”

Actual photos show that Larry sat next to Cesar Chavez and Jerry Cohen, United Farm Workers’ (UFW) as signers of the contract between UFW and the growers, signaling victory for the farmers.

“Yet this Hollywood movie eliminated my father from the table and instead, showed Larry passively smiling in the sidelines,” said Johnny Itliong.

The younger Itliong said he confronted the director at the March 12 showing, asking why his father was cut out from this historical photo. Luna reportedly replied, “It’s movie-making.”

“The problem,” said Silva, “is there is an obvious attempt to camouflage this part of the narrative. It will not be a surprise if some viewers would find it disturbing that glimpses of Filipino American contributions appear unexpectedly, instead of the director making a clear message.”

For example, it was very odd that in one scene Cesar Chavez was speaking in a room-full of Latinos, while a gigantic sign stretches across the entire room: FILIPINO AMERICAN COMMUNITY CENTER OF DELANO, and there’s a row of portrait photos on the wall, including the Philippines 1st President, Emilio Aguinaldo.

“There where only four or five Filipinos in the entire hall, all shoved at the back of the room, with Larry Itliong as a passive observer,” lamented Silva whose “Gintong Kasaysayan” mural at the Historic Filipino Town in Los Angeles prominently features Itliong.

“The Filipino farmers from the 1920s and the generation of Itliong, Philip Vera Cruz, led many, many strikes in the field for fair conditions,” said author Peter Bacho, whose parents were farmers and cannery workers from Seattle.

“As a teen-ager, I met Itliong in the ‘60s and he does not have a retiring personality as portrayed in this film.  He definitely was articulate and assertive and was leading the strikes even while Chavez was just a young boy.”

In attendance at the “Delano Manong” premiere in Oakland was Assemblyman Rob Bonta, who spearheaded the California State Senate adoption of AB 123 to re-write school books to reflect the leadership of Filipino Americans and others in the farm labor movement.

Johnny Itliong was pleased to hear Bonta’s personal support of the documentary. “Before the picket, I received a call from one of his staffers discouraging me from proceeding with the picket of ‘Chavez’ as it would be viewed as divisive by the Hispanic communities,” the young Itliong disclosed.

“After I pointed out to Assemblyman Bonta about the discrepancy between the Hollywood movie and the actual historical data as reflected in “Delano Manongs,” he said he was on my side.

“Even Cesar Chavez would turn in his grave, because in as much as he owed a debt of gratitude to Sen. Robert Kennedy for being the champion of the civil rights of workers (which was accurately depicted on film), Cesar was equally indebted to Larry Itliong, who had more than 30 years organizing experience and taught himself nine Philippine dialects and three foreign languages (including Chinese, Japanese, Spanish) to become an effective organizer and communicator to non-Spanish speaking members of the union,” said Silva.

“’Chavez’ would have succeeded had it taken a risk in telling the true story of this triumvirate — Bobby Kennedy, Larry Itliong, Cesar Chavez — that converged to create an American phenomenon known as Cesar Chavez,” said Silva.

A Filipino in the fields; Larry Itliong on his 100th birthday

Read Next
PH not (yet) on ‘enemies of the Internet’ list
EDITORS' PICK
PH’s COVID-19 active cases reach over 190k after 12k new infections reported
Speed up your game with the new vivo Y20s [G]
WHO says not to use ivermectin on COVID-19 patients
Pru Life UK receives four golden arrows for solid corporate governance
Harry Roque in hospital for COVID-19 treatment
Pre-order the new vivo Y20s [G] to get a free TWS earphone
MOST READ
Stop ‘creeping occupation’ of ‘militia’ boats in WPS, Pacquiao asks China
Bea Alonzo clarifies status of her relationship with Dominic Roque
Convicted former aide of Sen. Bong Revilla dies — BuCor
Locsin to China: ‘Then move out’
Don't miss out on the latest news and information.