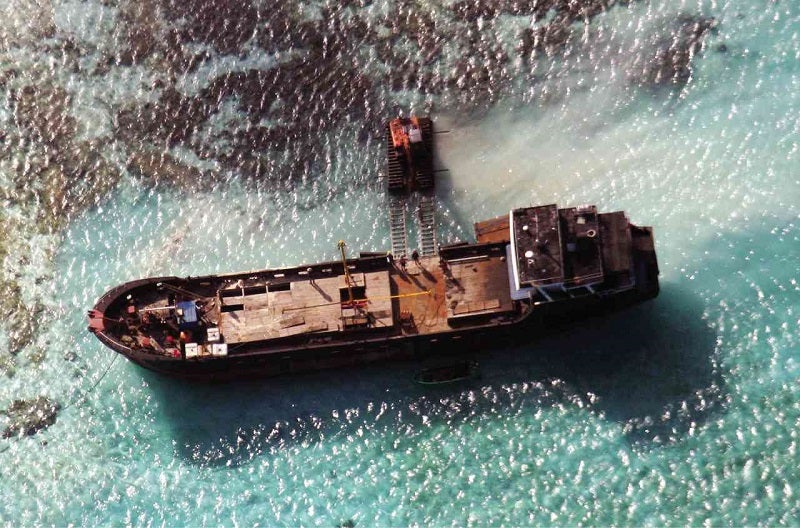 ‘EARTHMOVING ACTIVITIES’ A backhoe attached to a Chinese vessel is apparently scooping up some filling materials in a reclamation project while at the same time harvesting endangered species, giant clams. PHOTO COURTESY OF THE ARMED FORCES OF THE PHILIPPINES

China has reclaimed land in one of the contested reefs in the Spratly Islands, and this time, the defense department is not the only one expressing concern, but Filipino scientists as well.

They have expressed alarm over China’s activities on the contested reefs in Spratly Islands, citing environmental degradation that could adversely affect the country’s population, with “diseases, scarcity of resources and conflict.”

The military has taken photographs of China’s ongoing reclamation activity on Malvar Reef in February, with the pictures showing a backhoe attached to a Chinese vessel that, scientists said, was presumably used to gather filling materials and harvest giant clams.

“It’s called ‘earthmoving activities’ and there’s quite a lot going on in the [West Philippine Sea] that we are monitoring,” Galvez told the Inquirer on the phone.

The defense spokesperson said China’s reclamation activities were especially worrisome not only because of the ongoing territorial dispute in the West Philippine Sea, but also because of its impact on the environment.

“The environment is an integral component of a state,” so environmental issues are considered security issues, according to professor Charithie Joaquin of the National Defense College of the Philippines.

“A state must be able to protect its territory and ensure that its citizens enjoy the benefits of the natural resources within its territory,” Joaquin told the Inquirer in an e-mail.

Environmental degradation could adversely affect the population, with “diseases, scarcity of resources and conflict,” she added.

“A sickly population impedes economic growth and drains much-needed resources.  Scarce resources, such as water or strategic minerals, could also lead to conflict or exacerbate existing tensions,” Joaquin said, adding that “the consequences of nonsustainable use of natural resources could be irreversible, impacting not just the current generation but generations to come.”

“Because of interconnected ecosystems, the impact oftentimes transcends borders,” she added.

Scientists at the University of the Philippines Marine Science Institute (UP MSI) are just as alarmed at China’s relentless harvesting of giant clams, considered endangered species, and corals in the West Philippine Sea.

One of the country’s foremost experts in marine life conservation, professor emeritus Edgardo Gomez of UP MSI, noted that one-fifth of the fish that Filipinos consume come from the West Philippine Sea, and move around or feed on reefs. Without the reefs, depleted fish productivity is a possibility, he added.

“If you destroy everything, there won’t be any source of food [for the fish],” Gomez explained.

Based on the February 2014 photograph of Malvar Reef, MSI deputy director for research professor Perry Aliño said the backhoe apparently served a dual purpose: to get filling materials for the reclamation and to harvest giant clams.

“[China was] not only collecting the shells but the substrate as well,” he said. A substrate is the base where an organism lives.

Land reclamation effectively destroys the reef and its surroundings, which would have a long-term impact on the environment, said Aliño, who coauthored one of the most definitive books on Kalayaan Islands, a result of an in-depth research conducted by UP MSI.

Reefs play an important role in maintaining biodiversity in the West Philippine Sea, the scientist said, adding that dredging in the reefs would eventually destroy and weaken their framework.

The destruction of the reefs near Pagasa Island in Palawan province could bring bigger waves to the only island in the Kalayaan Island Group, where a small community lives, because reefs serve as ripraps or natural breakwaters that could reduce the force of incoming waves, Gomez said.

The Philippine military has monitored Chinese poachers using dinghies to routinely harvest giant clams (Tridacna gigas), an endangered species of clams, as well as corals and other clam species.

Some 30 to 45 dinghies trawl for giant clams and corals in areas in the West Philippine Sea, like Ayungin Shoal, Pagasa Island, Tizard Bank and reefs, Union Banks and reefs and Hasa-Hasa Shoal, and store their catch in the vessels’ huge cargo hold.

The clams, used for food or decorative purposes, are reportedly sold in the black market in  Hainan province in China, with clam shells fetching from

Aliño explained that clams grow on top of each other, such that when they are harvested by dredging, even the fossilized clams are collected.

“They are getting depleted, which would make them more valuable,” he said.  “The clams need to be restocked. [But] if they are restocked clams, then they are more valuable because there is already an investment in terms of putting them back.”

The UP MSI has a restocking program for cultured clams for the past 30 years, a brainchild of Gomez who hand-carried the microscopic specimens of giant clams from Solomon Islands that the UP MSI laboratory used for their first cultured giant clams.

The cultured clams are then distributed to different parts of the country, although not a substantial number has been sent to Kalayaan Island Group.

Clams cultured at  UP MSI Bolinao Marine Laboratory in Pangasinan province have been brought to Panatag Shoal or Bajo de Masinloc in Zambales—and most likely already harvested by the Chinese.

Gomez said it was about time that the government had a “game plan” that would not only protect the territory but also conserve natural resources.

Gomez said it was time for the government to “support blue water oceanography that will help our scientists do research on our [Exclusive Economic Zone] and show the [Philippine] flag.”

“If we have research vessels going out to [Kalayaan Island Group], Scarborough Shoal, the east coast of the Philippines … we are [at least] showing our presence,” he added.

Read Next
Bill in Congress wants song and dance program for OFWs
EDITORS' PICK
Acer Philippines welcomes you to its first flagship store
PNP’s Covid-19 cases jump to 9,809; 52 new infections logged
Pope Francis to miss events due to new flare up of leg pain—Vatican
Is your company a growth champion? Stand up and be recognized!
More than 150 National Guard in Washington for Biden inauguration test positive for coronavirus
New Year, New Rediscoveries
MOST READ
AFP to apologize to UP alum falsely included in list of NPA members — Lorenzana
Filipino restaurants thriving in Washington DC
Why Kris Aquino sleeps with her pearls
Ellen DeGeneres, too, is baffled by viral Filipino soda ad
Don't miss out on the latest news and information.