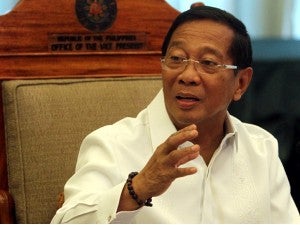 MANILA, Philippines—Two years ahead of the 2016 presidential election, Vice President Jejomar Binay appeared to be flexing his diplomatic muscles by holding “back channel” efforts with Chinese officials, a source from the Filipino-Chinese community said.

The source, who was privy to the meeting but did not want to be identified for lack of authority to speak on the matter, said  Binay held a low-key meeting on Thursday night with top Chinese Embassy officials to lay the groundwork toward patching frayed relations between the Philippines and China over competing claims on territory.

According to the source, new Chinese Ambassador to the Philippines Zhao Jianhua hosted a dinner for the Binay family at the envoy’s residence in Makati City, on the same day that the Philippine government bared fresh Chinese incursions in the West Philippine Sea.

The source could not confirm whether the dinner-meeting with the Chinese officials had the blessing of President Aquino.

“It was a purely social gathering, no different from the dinners hosted for the family by new ambassadors,” according to Binay’s spokesperson, Joey Salgado.

In September 2012, Sen. Antonio Trillanes IV claimed that he was tasked to conduct back channel efforts with China, which did not sit well with Foreign Secretary Albert del Rosario.

According to the DFA official, “… while back-channeling has its purpose, in our case it’s doing more harm than good. It is important that we speak with one voice on this matter.”

The source said the Chinese officials were aware that Binay was the leading presidential contender in 2016 based on recent surveys.

In April, Sun issued a statement saying the Philippines’ decision to seek the United Nation’s arbitration in the West Philippine Sea dispute would “seriously damage” bilateral relations with China. He urged the Aquino administration to “correct its mistake and come back to the right track of resolving the disputes through bilateral negotiations.”

The meeting happened nearly two months after Binay and Zhao first met officially on April 15, when the Chinese ambassador paid a courtesy call on the Vice President at the Coconut Palace.

Zhao arrived in Manila on Feb. 23 and began his tour as China’s envoy in the Philippines on April 7, when he presented his credentials to President Aquino.

Binay: EDCA not meant to ‘freeze ties’ with China

Binay: I left PDP-Laban due to disunity in party