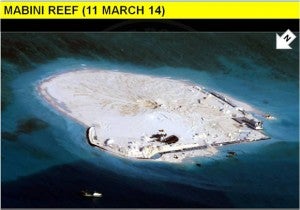 China’s land reclamation on Mabini Reef (Johnson South Reef) in the West Philippine Sea is “jeopardizing” the Philippines’ arbitration case in the United Nations, the Department of Foreign Affairs (DFA) said on Friday.

The case the Philippines filed in the UN International Tribunal for the Law of the Sea in The Hague, the Netherlands, in January last year seeks clarification on maritime jurisdiction and entitlements in the West Philippine Sea, but China’s creation of an islet there could potentially expand Beijing’s territorial sea in waters clearly within Manila’s 370-kilometer exclusive economic zone, DFA spokesperson Charles Jose said.

He said the Philippines raised that concern with China in its April 4 protest against Beijing’s reclamation of land on Mabini Reef that could be used to build an airstrip or a military base.

“That we are protesting, that’s in violation of [the Declaration on the Conduct of Parties in the South China Sea] and  is jeopardizing the case because what they are doing will change the nature and character of that feature, which will somehow have an implication on the panel that was constituted to decide objectively in this case,” Jose said.

The declaration of conduct is a nonaggression pact that China signed with the Association of Southeast Asian Nations (Asean) in 2002 to prevent territorial claims in the South China Sea from erupting into conflict.

China claims almost the whole 3.5-million-square-kilometer South China Sea, setting it against Asean members Brunei, Malaysia, the Philippines and Vietnam, as well as Taiwan, all of which claim territories within their exclusive economic zones.

Jose called China’s land reclamation on Mabini Reef, which was detected by Philippine Navy surveillance planes six months ago, an “infringement on our sovereignty.”

Beijing readily rejected Manila’s protest on the grounds that the reef was Chinese territory.

The Philippine arbitration case includes a request for a ruling on the physical nature of Mabini Reef—whether it is a rock or an islet.

Under the United Nations Convention on the Law of the Sea, the basis of the Philippine case, a country’s maritime entitlement to a rock formation above water extends to 22.2 km, Jose said. But turning that rock into an islet could expand the entitlement, he said.

“If you will change the character or nature of that feature, from a rock to an island, of course, the maritime entitlement will become different, it will be bigger,” Jose said. “Our area is shrinking, so we are jeopardized. So the physical nature of the feature should not be changed.”

Jose said the DFA was consulting its legal advisers on the possibility of adding China’s latest incursion into Philippine territory to the arbitration case.

China has rejected the proceedings, citing its “indisputable sovereignty” over the South China Sea.