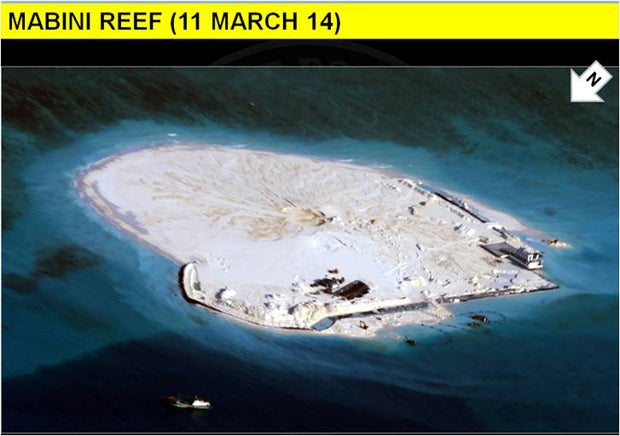 MANILA, Philippines – China defended its move to do reclamation and construction activities in Mabini Reef (Johnson South Reef) that is part of the Kalayaan Island Group in the West Philippine Sea.

The Department of Foreign Affairs (DFA) released a series of photographs from 2012 to 2014 showing the progression of development China has made on the reef.

The first photo in 2012 showed a wide expanse of water with a small outpost on the reef.

The second photo taken in 2013 showed a concrete structure already built on the reef with what appears to be a helicopter landing pad.

Two photos taken in February and March 2014 show a large portion of the reef already reclaimed with sand making it look like a sand bar.

DFA spokesman Charles Jose said in a briefing after the release of the photos that China was likely constructing an airstrip that will be used for military purposes.

China rejected the protest filed by the Philippines regarding the reclamation citing its nine-dash line claim that covers nearly the entire South China Sea including portions of the Philippines’ 200-nautical mile exclusive economic zone.