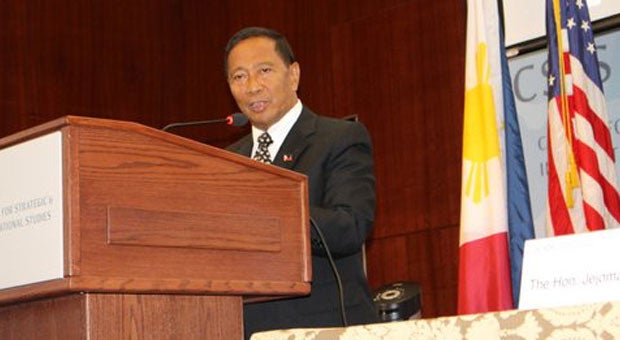 Vice President Binay at the CSIS. PHOTO BY JON MELEGRITO

• Calls his 20-year service as city executive “a success story”


WASHINGTON, DC – Sounding like a presidential candidate with a platform, Vice President Jejomar C. Binay on May 1 told an audience of diplomats, U.S. policy makers, business leaders and members of the Filipino American community that he is definitely poised to succeed President Aquino in the 2016 national elections.

“It’s not a rumor anymore,” he said, referring to his presidential aspirations.  “It is true. I had a dream the day after I was elected Mayor of Makati. And Makati was my laboratory.”

Binay cited his 20 years of executive experience as a “success story,” with accomplishments that included “alleviation of poverty” and “enhanced delivery of services in education, health and social welfare.”

An open forum Binay’s followed 45-minute presentation at the Center for Strategic and International Studies (CSIS), where he disclosed his candidacy and outlined his own plans “beyond President Aquino’s term.” Banyan Tree Leadership Forum hosted his presentation

“I am in favor of changing the constitution to make the country more attractive to local and foreign investors,” Binay declared, responding to a question about “seducing foreign capital” by making the country much more than tourism’s slogan, “It’s more fun in the Philippines.”

Using the word “liberalize” many times in his speech, Binay concluded that “more investments lead to more employment.”

He also foresees continued trade with China, despite its resurgence as a military power that threatens control of the South China Sea. 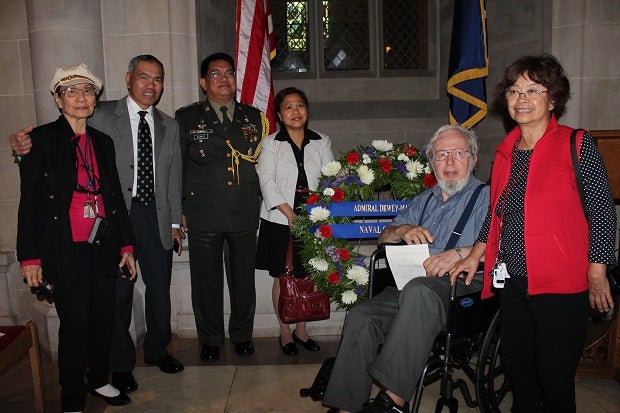 FilAm community leaders at the wreath-laying at the tomb of Adm. George Dewey. PHOTO BY JON MELEGRITO

“In the end, trade, as well as the deep filial ties that bind our peoples will prevail over the issues of territory and boundaries that are currently threatening our relationship” Binay said.

The vice president’s speech in the afternoon of May 1 coincided with a commemoration of Admiral George Dewey’s victory against the Spanish Squadron, which happened on the first of May, 116 years ago.

Attended by Filipino American community leaders who also heard Binay’s speech at the CSIS, the morning event recalled how the Battle of Manila Bay signaled the opening of US-Philippine relations, starting with the Philippine war of independence against the U.S.

Cited by some historians as a betrayal of the Filipino people when their struggle for liberation was crushed, this historic episode was brought to the Binay’s attention during the open forum.

In his earlier remarks, he had praised the recently concluded Enhanced Defense Cooperation Agreement (EDCA) signed in Manila during President Obama’s visit.

During the Q&A, Binay curtly replied that EDCA “is not a betrayal,” that the security agreement’s constitutionality is valid, and that the Filipino people will support it. He did not elaborate, however, on the historical connections.

His reply prompted this quip from Sonny Busa of Alexandria, Virginia, a former U.S. diplomat and military historian: “There may be no small irony between Dewey’s victory that established US presence in the Philippines and the signing of EDCA, which marks the return of the U.S. But whether or not this is a good thing remains to be seen.”

Maurese Oteyza Owens of Arlington, Virginia, also wondered if history is repeating itself: “We find ourselves 116 years later honoring the man who blew up Spain’s 400-year domination that led to America’s 50-year rule.  And in six weeks, we will be celebrating the 116 years of Philippine independence from Spain. But today, we have the U.S. presence in the Philippines once again, for who knows how long, and how involved they will be this time around.”

For the most part, community members who heard Binay applaud today’s US-Philippine relations agreed that the Philippines has benefited i, particularly in the rescue and recovery efforts after Typhoon Haiyan.

“We’ll just have to keep an open mind as we continue to debate the merits of this agreement,” says community leader Mitzi Pickard of Vienna, Virginia. “Our community should engage in active discussions so we can understand fully the nature of this relationship and how best we can influence its future direction.”

UNA confident Binay will be president in 2016