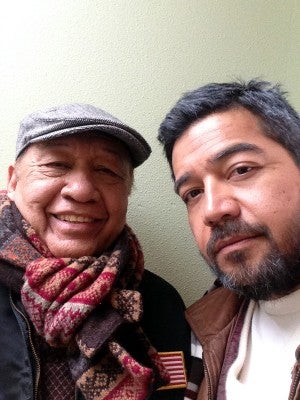 A San Francisco theater company was looking for actors for a play on Filipino World War II veterans when Fil-Am theater artist Michael Dorado had an exciting thought: Why not ask his dad to audition?

That has led to a moving story of a Fil-Am father-and-son team who are now part of a theater production meant to honor Filipino beteranos. For Michael and Fred Dorado, who play key roles in “The Guerrillas of Powell Street,” the message of the play is personal.

The Bindlestiff Studio production, directed by Pablo Bautista, is honoring people like Lt. Alfredo Sese, a survivor of the Bataan Death March who fought in the underground resistance against the Japanese occupation.

He was also Michael’s lolo and Fred’s father-in-law.

“I never met him,” Michael, board chair of Bindlestiff, the prominent Filipino American theater company based in San Francisco, told me. “This is how I’m learning about him. To have this opportunity to participate in a show like this definitely has a lot of meaning.”

Meaning based on the life of his lolo who had such an incredible story that his war exploits were even mentioned in “Some Survived,” an account of the battle of Bataan, one of the most intense and bloodiest episodes of the war.

Lieutenant Sese was one of the few lucky ones to survive the grueling prisoner of war death march. But even after going through that harrowing experience, he kept on fighting. 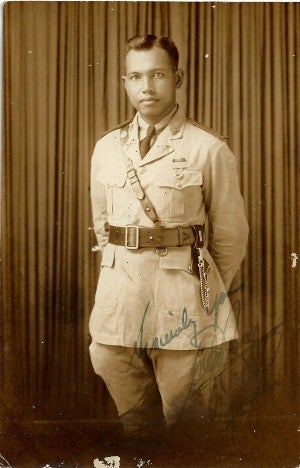 “He went back to Manila and lay low,” Fred said of his father-in-law. “The Japanese didn’t know that he was with the underground. They had meetings in his basement.”

The Dorados are getting chance to delve into the life of the Filipino World War II guerrilla in the English translation of the play by Rody Vera (based on my novel Mga Gerilya sa Powell Street).

The play tells the stories of a group of Filipino World War II veterans who moved to the US in the 1990s after they were finally granted US citizenship promised to them by the US government.

Fred plays the lead role of Fidel. Michael plays another veteran and one of Fidel’s friends, Badong.

The characters portray the typical struggle of the beterano who moved to the U.S. in the 1990s: They were old when they took on the challenge of coming to America, which meant they were no longer in their prime years when they embraced a life of isolation and poverty in a strange, cold city, thousands of miles from their families.

Why did they do it? To send money to their families, or maybe even make it possible to bring them to the US.

Fred, who just turned 74, was a young boy during the war, and he has memories of his family being always on the run and hiding in the jungles of Capiz.

He was initially hesitant to get involved in the play. While his son, Michael, has been immersed in Fil-Am theater for years, Fred, a retired pharmaceutical industry executive, doesn’t have much stage experience.

Michael describes his dad as a “great storyteller,” who liked “putting shows for my kids.” Fred had acted in high school productions in his native Capiz. “I was one of the kids in ‘The Sound of Music,’ and one of the princes in ‘The King and I,’” he recalls, with a chuckle.

But that was it.

“I basically twisted his arm to audition,” Michael recalls. One reason is he wanted to get his dad more involved in theater. “I think there is an actor inside him that hasn’t come out in decades.”

His persistence paid off. Fred auditioned and was given the lead role.

“I got hooked,” he says. “I thought it’d be awful, but now it’s exciting. This is the first time that I’ve really been on stage with my son.”

For Michael, it’s been both a fun and uplifting experience.

“This is a once in a lifetime opportunity, to be on stage together and to spend this time together,” he says.

That has also turned into an emotional time for Michael Dorado.

In the play, the beteranos sing the classic song, “I Left My Heart in San Francisco.” During one rehearsal, Michael recalls, his dad, the veteran performer in high school productions, “sang it so beautifully.”

Michael pauses as he recalls the moment.

(“The Guerrillas of Powell Street” opens July 12 (with previews on July 10 and 11. To purchase tickets go to http://guerrillas.bpt.me/

For more information, check out the site: http://www.bindlestiffstudio.org/gps/cast-and-crew/

On Bataan day farewell to a guerrilla