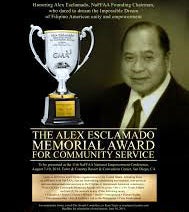 WASHINGTON, DC – San Diego County, the home to more than 150,000 Filipinos and Filipino Americans, will host the 11th biennial empowerment conference of the National Federation of Filipino American Associations (NaFFAA) on August 7-10.

The service awards, which are open to non-NaFFAA members, will honor three national Filipino American organizations that best exemplify the spirit of community service in the field of education, arts and culture, civic involvement, women’s affairs, politics and government and aid to the Philippines. Deadline for nominations is June 30.

The scholarship fund provides financial assistance to deserving students, notably those who plan to pursue public advocacy and public service.

Esclamado, who died in November 2012, is one of the leading founders of NaFFAA and was its first national chairman.

Driven by his vision of a unified and empowered community, he and his wife Luly traveled all over the U.S. 17 years ago, urging community leaders to join the Filipino American community empowerment movement. Close to 2,000 delegates, including hundreds of young people, attended the August 1997 founding conference in Washington, DC.

Another highlight this year is the start of a nationwide campaign to press the US Congress to issue a national proclamation and award the Congressional Gold Medal to Filipino soldiers for their wartime service to the United States.

“There has never been a formal declaration to recognize them for their sacrifice and loyal service,” he said. “It’s about time we thank and honor our brave soldiers for their exemplary record of selfless sacrifice and love of country.”

Taguba noted that other groups have been recognized with a Congressional Gold Medal, the highest civilian award in the United States. They include the Japanese American Nisei soldiers, Navajo Code Talkers, Montford Marines, Tuskegee Airmen and Women Air Service Pilots (WASP).

“Filipino World War II soldiers are equally deserving of this award because they fought valiantly under the American flag,” Taguba points out. “But the Rescission Acts of 1946 deprived them of all nonservice-connected veterans’ benefits and changed the status of Filipino Veterans almost immediately upon conclusion of the War.”

NaFFAA continued to press for their benefits over the years, working in coalition with other veterans organizations and advocacy groups. In 2009, President Obama signed a bill providing a one-time cash payment to more than 18,000 veterans.

The conference is expected to draw more than 500 community leaders and guests from across the country. It will focus on the development of key strategies to address the political, social, health, education and economic concerns of the Filipino American community.

“Our goal is to provide a venue in which we can assess current conditions and move in a positive direction to ensure the growth and improvement of our communities,” said NaFFAA National Chairman Ed Navarra.

Added host Regional Chair Aurora Cudal: “We also want to engage our young people by tapping their skills and resources as we build together a new master plan for the next generation of leaders. Standing on the shoulders of those before us, we hope to become stronger advocates for community empowerment by building our capacity to face the challenges before us.”

To speak to these issues and concerns, NaFFAA has invited elected officials, business leaders and entrepreneurs, civil rights and community activists and other public officials.

More than a dozen workshops will be held during the conference, focusing mainly on capacity building, civic engagement, professional development, cultural identity/narratives and “Empowering [email protected] Youth through Collaboration. These workshops are designed to be “participatory, engaging and interactive.” An all-day pre-conference leadership institute is slated for August 7.

REGISTRATION & OTHER DETAILS: Venue for the four-day conference is the Town and Country Resort Hotel and Convention Center in San Diego. For more detailed information:http://empowerment.naffaa.org