On Bataan Day, farewell to a guerrilla 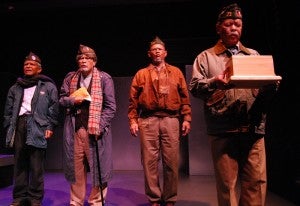 SAN FRANCISCO — A San Francisco pay phone was a prominent part of the set in the 2008 Tanghalang Pilipino production of ‘Mga Gerilya sa Powell Street.’

Whenever it rang, it was a signal that yet another Filipino veteran character in the play had passed away.

In the story, one of mostly old and frail beteranos liked to say that they were just waiting for that long-distance call from beyond while hanging out on the famous street in San Francisco.

The play was based on my novel in which a character also compares waiting for death with waiting for a phone call. It was playwright Rody Vera and director Chris Millado who came up with the idea of turning that line and image into a theatrical device. When I watched the play with my father, I tried to see his reaction to the pay phone.

That’s because that line and that image came from him.

Through the years, whenever he was asked how he was doing, he would respond, “Ito, naghihintay na lang ng long distance mula sa langit (I’m just waiting for that long distance call from heaven).”

He could no longer hear clearly when he saw the play so I’m not sure if he recognized his own words and his own concept of the end of life.

But he seemed happy that night. With him at the Cultural Center of the Philippines were fellow veterans, former guerrillas who once defended their country.

We honor them every year, the Filipino veterans of the Second World War. This week, we remember those who fought in the war’s most well-known battle, the fall of Bataan. That tradition should continue. We owe it to them. In fact, “Mga Gerilya sa Powell Street” was a tribute to my father and others like him.

It was also an apology.

I grew up knowing about the war and every major event in that conflict, from the fall of Bataan to the fall of Corregidor to Douglas MacArthur’s “I Shall Return” landing on Leyte Island. But there was a time when young people of my generation played down the importance of that war and the Filipinos who fought in it.

As a student at UP Diliman, inspired by the nationalist movement of the ‘70s and ‘80s, I came to share the view that the Second World War was actually America’s war, that the struggle against the Japanese did not really lead to “liberation,” but to a “restoration” of American colonial rule.

This perspective was underscored in 1994 when the US and the Philippines marked the 50th anniversary of MacArthur’s return and the fulfillment of his “I shall return” pledge.

In the Philippines, the anniversary was celebrated with a reenactment that didn’t exactly go as planned. When the actor playing MacArthur stepped off the landing vessel, he tripped, falling into the water, dark sunglasses, corn cob pipe and all.

I had a great laugh over that.

I also wrote an even less celebratory piece for the San Francisco Chronicle, opening with a quote from a Filipino veteran who said that for Filipinos like him, MacArthur was “like god.” I then went on to reaffirm the more downbeat view of “liberation,” exploring the less uplifting side of US-Philippine relations.

I still embrace that critical view of history. But in turning the spotlight on the inequalities and even the injustices in that relationship, many of my generation also inadvertently downplayed, even belittled, what people like my father went through.

Indirectly, we were questioning the value and significance of their sacrifices. We were saying that what they did didn’t really amount to much.

That was unfair. In fact, it was wrong.

As I wrote in a previous column, he had just turned 20 when he joined a clandestine group that published an underground newspaper against the Japanese occupation. Later, he joined the armed resistance as a guerrilla.

The experience left him scarred physically and emotionally. He had nightmares for decades. An athlete and physical fitness buff as a young man, he came out of the jungles battered by malaria and tuberculosis.

And by the memory of his younger brother.

Shortly before the war ended, my Uncle Jesus was picked up by the Kempetai, the Japanese secret police. He was never seen again.

My father never talked much about him. But I’ve wondered if that was the tragedy that haunted him at night pretty much all his life.

I’ve also wondered how his own father, my Lolo Luis whom I never got to know, viewed my father’s decision to join the resistance. Was he supportive? Or did my Lolo urge him, warn him not to get involved, to just accept Japanese rule, to simply keep silent?

I ask these questions because roughly three decades later my father himself would be put in the situation in which I imagine my grandfather found himself during the Japanese occupation.

The Marcos years in the 70s and 80s were tough times for my father and our family. My two older sisters went underground after martial law was declared. As a teenager, one of my responsibilities was to wait for a call from one of them to find out where I should pick them up so they could spend Christmas at our house.

My oldest sister, Nymia Pimentel Simbulan, now a professor at UP Manila, was imprisoned twice, including a six-month stint at a detention center where the fancy malls and condominiums of Bonifacio Global City now stand.

All these caused serious tensions between my sisters and our father who, while opposed to dictatorship, was even more vehemently opposed to his daughters’ deep and dangerous involvements. They were fighting a “war” he could not completely understand. That made him angry, essentially declaring, “You don’t know about war. I fought in a war.”

The fall of Marcos put an end to these family conflicts. My sisters eventually left a movement in which they fought bravely with modern Filipino heroes such as Edgar Jopson, Ferdie Arceo and Lorena Barros, but which morphed into a violently dogmatic political force. (In 2005, my sister Nymia, the executive director of the Philippine Human Rights Information Center, helped write a report exposing the way rebel groups, including the New People’s Army, abused children by recruiting them as rebel soldiers.)

Meanwhile, my father found himself immersed in another battle.

He was never big on joining high-profile campaigns. But he closely followed the fight in the United States over equity rights for Filipino World War 2 veterans, a battle featured in “Mga Gerilya sa Powell Street.”

I got the sense that he wasn’t even aware of the promises the US made to the guerrillas who fought under American command. Like the thousands of other beteranos, he felt betrayed.

Many of them will be honored once again at this week’s Bataan Day commemoration.

Sadly, my father will not be able to join them. Two weeks ago, the long distance phone call my father had been waiting for finally came.

For the former guerrilla, it was time to move on.