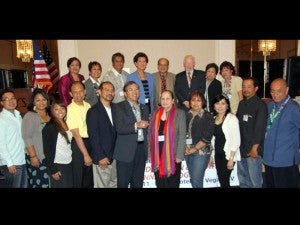 LAS VEGAS, NEVADA – About 90 executive board members and representatives of the 12 regional chapters of the National Federation of Filipino American Associations (NaFFAA) attended the organization’s Strategic Planning Conference at the Las Vegas Bally’s Hotel on May 13-15 to discuss the federation’s national agenda for 2011-2012.

“It was a very successful conference,” said Ed Navarra of Bloomfield Hills, Michigan, NaFFAA national chair. “We unified our ranks throughout the US, defined our strategy of primarily empowering our community through advocacy, discussed ways and means of strengthening all NaFFAA regions, and approved resolutions of concern to our community.”

NaFFAA’s FilAmVOTE project to encourage more Filipino Americans to be registered voters and to actively participate in the political process was the first issue tackled at the conference. Co-chairs Merit Salud, a Democrat from New York, and Rudy Asercion, a Republican from San Francisco, discussed the need to increase the registration of FilAm voters to become a political force in US politics.

The Political Empowerment plenary session was presided by Gloria Caoile, former Executive Director of the Asian Pacific American Labor Alliance (APALA), a major sponsor of the NaFFAA conference. Vida Benavides, a Democratic Party strategist and former White House official in the Clinton Administration, encouraged NaFFAA members to bring the issues of the community to whatever political party they join.

Newly-appointed Philippine Ambassador to the US Jose L. Cuisia, Jr. addressed the NaFFAA members in the afternoon plenary about the Save Our Industries (SAVE) Act, sponsored in the US Senate by Sen. Daniel Inouye (D-Hawaii) which would allow apparel products from the Philippines to enter the U.S. duty-free.

“The Philippine government understands how important this legislation is to our workers and our relationship with the U.S.,” Cuisia said. “The SAVE Act would provide tens of millions of dollars in new exports for U.S. businesses and save hundreds of thousands of jobs in the Philippines,” he added.

NaFFAA leaders also discussed with Cuisia the need for closer cooperation between the Philippine consulates and NaFFAA regarding assistance provided to “disadvantaged Filipinos” pursuant to a Memorandum of Understanding previously entered into between then Department of Foreign Affairs Secretary Blas Ople and then NaFFAA Chair Loida Nicolas Lewis.

“US taxpayers will save at least $5,000 per year for each Filipino American retiree who chooses to return to the Philippines if Medicare reimburses their medical expenses. If 100,000 US retirees reside in the Philippines, Medicare yearly savings would be $500,000,000 and would greatly help our US government meet budget priorities in job creation, education and deficit reduction,” Lachica stressed.

NaFFAA also unanimously endorsed passage of the DREAM (Development, Relief and Education for Alien Minors) Act which was recently reintroduced in the US Senate on May 11, 2011. The bill would provide conditional permanent residency to illegal alien students who graduate from US high schools, are of good moral character, and have been in the country continuously for at least five years prior to the bill’s enactment if they complete two years in the military or two years at a four year institution of higher learning.

NaFFAA Legislative Affairs Director Jerry Clarito explained that tens of thousands of Filipinos would benefit from passage of this Act including Miguel Gulfin, who was only 7 when his parents brought him to the US in 1991. After graduating from high school in New Jersey, US Immigration authorities placed him in deportation proceedings after learning of his illegal status. While fighting deportation, Gulfin serves as president of the Campus Crusade for Christ based in Brookdale, N.J. where he regularly participates in evangelization work among students.

Gulfin’s application for a stay of deportation before the Department of Homeland Security (DHS) is being handled by the Filipino American Legal Defense and Education Fund (FALDEF) headed by New York immigration attorney J.T. Mallonga, national vice-chair of NaFFAA.

Global Summit on Filipinos in Diaspora

NaFFAA also announced plans to continue the Global Filipino Networking Conference it initiated in San Francisco in August 2002 after delegates unanimously voted to co-sponsor the Global Summit of Filipinos in Diaspora which is scheduled to be held in Manila on September 27 to 29, 2011 at the Philippine International Convention Center (PICC). The Diaspora Summit will be co-hosted by the Philippine Commission on Filipinos Overseas (CFO) headed by Chair Secretary Imelda Nicolas and the US Pinoys for Good Governance (USP4GG) whose national chair is Loida Nicolas Lewis.

Branigin will also inform Summit delegates about NaFFAA’s participation in the successful campaign to pass a Veterans Equity Bill that provided financial benefits to about 20,000 surviving Filipino WW II veterans. She will also update Summit delegates about NaFFAA’s lobbying work for passage of the Save Act, the Dream Act and the Medicare Portability Act.

NaFFAA delegates also honored Lourdes Mitra Esclamado, one of the founders of NaFFAA along with her husband Alex who served as NaFFAA’s founding chair. Luly, as she is fondly called by NaFFAA members, has attended every NaFFAA conference since its founding in Washington DC in August 1997. Although she and her husband plan to retire to the Philippines later this year for health reasons, she assured NaFFAA members that she plans to continue her work on the by-laws committee of NaFFAA.

At the closing session of the conference, Navarra expressed the appreciation of NaFFAA to the work of Region Chair Nadia Jurani, Nevada State Chair Amie Del Monte, Youth Adviser Jing Espiritu, former National Vice-Chair Rozita Lee and the entire Nevada Region XI for their excellent work in hosting the conference. He confirmed that the 10th NaFFAA National Empowerment Conference will be hosted by Region 3 under the leadership of chair Emraida Kiram in Detroit, Michigan on the first week of October, 2012 with Michigan State Chair Willie Dechavez as Conference Chair.

For more information on NaFFAA, log on to www.NaFFAAUSA.org.