Filipinos in Thailand urged to cooperate with military authorities 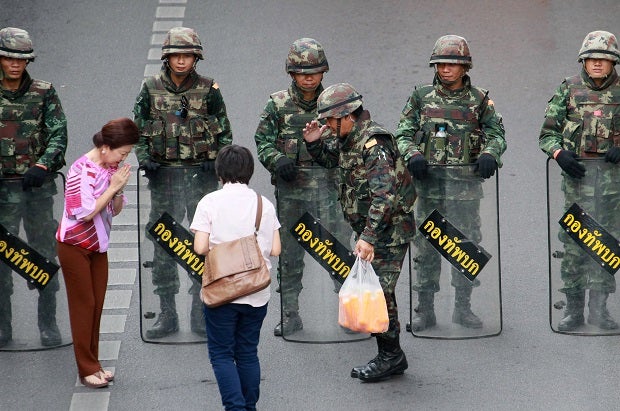 Well-wishers hand cold drinks to Thai soldiers securing the area to prevent an anti-coup demonstration at Victory Monument in Bangkok, Thailand Thursday, May 29, 2014. Hundreds of Thai troops and police sealed off one of Bangkok’s busiest intersections Thursday in an attempt to block a planned protest one week after a military coup. AP

MANILA, Philippines—Filipinos in Thailand have been advised to obtain clearance from the military if they are travelling during curfew hours and to follow all instructions of authorities.

The Philippine Embassy in Bangkok also urged the more than 16,000 overseas Filipinos in the country to “exercise extreme caution” and ensure that they have their identification documents with them at all times.

“Members of the Filipino community in Thailand are advised to continue exercising extreme caution and vigilance for their own personal safety in view of the recent political developments,” the Philippine Embassy in Bangkok said in a statement Friday.

“Please note that travelers who need to leave for, or depart from, the airports, as well as those working night-shifts, during the curfew, will be allowed to proceed to the airport or hotels, with clearance from military commanders near their area of residence/ temporary lodging,” it said.

The Thai military recently took control of government in a coup after several weeks of political turmoil. Thai Prime Minister Yingluck Shinawatra was removed from office last May 7, 2014 following an order from the Constitutional Court of Thailand.

The Philippine Department of Foreign Affairs (DFA) has issued crisis alert level 2 for Thailand which entails a ban on the deployment of newly hired overseas Filipino workers (OFWs) and preparations for the possible evacuation of Filipinos already there.

“Please follow security instructions from/ advice by the Thai authorities, including staying indoors during the curfew period, which is now from midnight to 4:00 a.m.,” the Philippine Embassy in Thailand said.

It also advised the following precautions:

2. Remain indoors for the duration of the curfew;

4. Refrain from taking part in protests and other political activities;

5. Carry valid identification documents with you at all times; and

The DFA previously said in a statement that Filipinos are safe in Thailand despite the ongoing political tension.