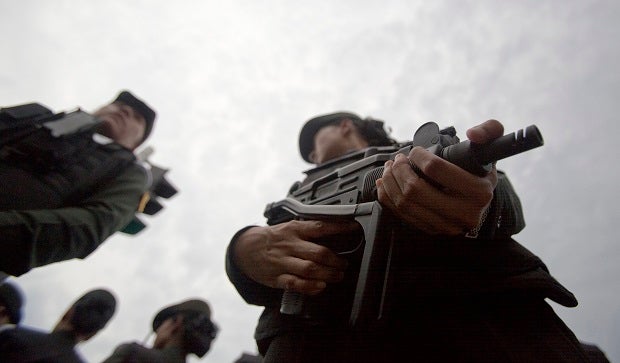 Military police guard during a anti-coup protester demonstration at the Victory Monument in Bangkok, Thailand Tuesday, May 27, 2014 . Last Thursday’s military takeover, Thailand’s second in eight years, deposed an elected government that had insisted for months that the nation’s fragile democracy was under attack from protesters, the courts, and finally the army. AP

MANILA, Philippines—Filipinos in Thailand are safe despite the unstable political situation there after a military coup, the Department of Foreign Affairs (DFA) said Wednesday.

Asked whether there were Filipinos in Thailand who have asked for assistance in going back to the Philippines, DFA spokesman Charles Jose said “none, based on the reports we have been getting from our embassy in Bangkok.”

“Although there are pro- and anti-coup demonstrations, generally the situation is stable and our Filipino kababayans (compatriots) there are safe,” he said.

There are 16,303 Filipinos in Thailand according to December 2012 records of the Commission on Filipinos Overseas.

The Thai military started a junta last May 22, 2014 after months of political instability highlighted by a Thai court’s ouster of erstwhile Prime Minister Yingluck Shinawatra.

Protests have also been held by opposing groups :”Red-shirts” that support Shinawatra and anti-government “Yellow-shirts” that called for her resignation on allegations that she is merely a puppet of her brother, former Prime Minster Thaksin Shinawatra.