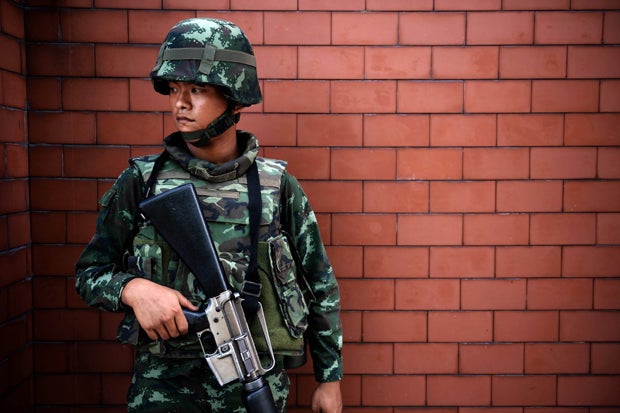 A Thai soldier stands outside the Government Public Relations Department after martial law was imposed in Bangkok on May 20, 2014. Thailand’s army on May 20 declared martial law across the crisis-gripped kingdom to restore order following months of anti-government protests that have left 28 people dead and hundreds wounded. AFP

MANILA, ‎Philippines–The Department of Foreign Affairs (DFA) has raised alert level two in Thailand in the wake of the Thailand Army’s declaration of martial law on Tuesday.

Charles Jose, DFA spokesperson, read in a press briefing on Tuesday the official statement of the agency’s raising of the alert level in Thailand from alert level 1 or the precautionary phase to alert level 2 or the restriction phase.

This means Filipinos residing in or travelling to Thailand are advised to restrict “non-essential movements,” avoid public places and prepare for evacuation “if necessary.”

“Alert Level 2 is issued when there are real threats to the life, security, and property of Filipinos arising from internal disturbance in or external threat to the host country,” Jose said.

Filipinos there were also instructed to avoid rally sites and large gatherings, and to refrain from participating in any protest or other political activities.

Enjoining Filipinos in Thailand to “exercise extreme caution and vigilance,” the DFA advised them to also “closely monitor developments‎.”

But the DFA official reiterated that they would not implement a tourist ban, barring Filipinos from flying to Thailand amid the unrest.

“The Philippines hopes for an early return to normalcy consistent with the will and interest of the Thai people,” Jose added.

Under the alert level 2, the Department of Labor and Employment (DOLE), meanwhile, will allow workers with existing contracts to return to their host country (balik-manggagawa).

Jose also assured that the Philippine Embassy has a contingency plan in place in case of violence that might erupt while the military takes over the Thailand government.

“The DFA team is ready to go to Thailand as soon as possible time to validate this contingency plan,” he added.

The martial law came after six months of anti-government demonstrations to press Thailand’s acting Prime Minister Niwattumrong Boonsongpaisan to step down. But the premier refused to quit.

The unrest has been continuing since Thailand’s former PM Yingluck Shinawatra was ousted by the court for abuse of power.

With no solution in sight for Thailand, investors look to PH, Indonesia