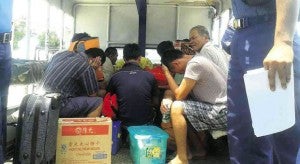 MANILA, Philippines – Justice Secretary Leila De Lima clarified Wednesday that while the United Nations Convention on the Law of the Sea (Unclos) discouraged imprisonment of poachers, those arrested from China would still be subjected to local laws and therefore would have to be treated as “alleged violators” with “the right to post bail”.

De Lima issued the statement after President Benigno Aquino III said the Philippines could not penalize the poachers with jail time as this was against Unclos, under which the country is a signatory.

“But the coastal State concerned, here in the Philippines, pursuant to its own laws and processes, may still arrest and detail alleged violators of the law, subject to their right to post bail,” De Lima said.

The nine Chinese poachers pleaded not guilty to violating the Fisheries Code of 1998 before the Palawan Court. The Department of Justice recommended P30,000 bail for violation of Section 87 (Poaching in Philippine Waters) and P40,000 for Section 97 (Fishing or Taking of Rare, Threatened or Endangered Species). Tetch Torres-Tupas