After 2 coups in 8 years, fears over Thai future 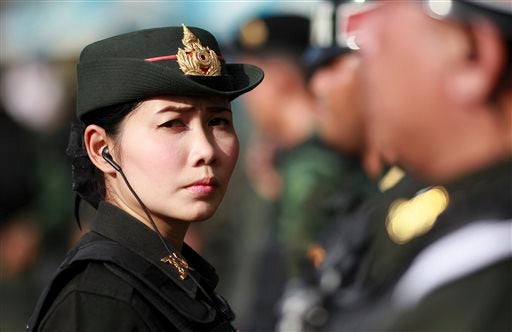 A female soldier and her colleagues take their positions at the Victory Monument in Bangkok, Thailand Wednesday, May 28, 2014.Thailand’s new military junta aired videos Wednesday on television stations nationwide showing some of the prominent political figures it has detained as part of an effort to convince the public that detainees in army custody are being treated well. AP

BANGKOK — The last time Thailand’s army seized power, in 2006, some called it “the smiling coup.”

Residents of Bangkok who supported overthrow of an elected government they accused of corruption poured into the streets, handing out flowers to soldiers who had deployed tanks across this metropolis of glass skyscrapers and ornate Buddhist temples.

It was bloodless, and for a time, it was calm.

Most of the country’s ousted government has been detained or is in hiding. Journalists, scholars and politicians are being ordered to surrender to army bases. Activists have fled. A nighttime curfew has been imposed. And protests, though small, have come almost immediately. The junta chief has issued ominous warnings not to criticize the takeover, but political movements spawned in the aftermath of the 2006 coup have vowed to resist.

So far, there has been no bloodshed. But as ousted Education Minister Chaturon Chaisang put it Tuesday, shortly before being hauled away by soldiers at a press conference in Bangkok: “If anyone thinks that the coup will stop all the conflict and the turmoil or violence, they would be wrong.”

The May 22 coup led by Gen. Prayuth Chan-ocha “will create more conflict,” said Chaturon, the only member of the deposed government who has spoken freely in public since the military took over. “From now on, there will be more and more resistance,” he said, adding that if violence erupts, “it will be a disaster for this country.”

The junta is trying to silence the critics it has detained by releasing them only if they signing a form agreeing not to do anything “provocative.” Violators could face two years in jail.

Thai news outlets have been shut down or are practicing self-censorship. The military has said it will crack down on online speech it considers inflammatory, though it denied responsibility for a brief and partial shutdown of Facebook in Thailand on Wednesday.

In 2006, there were no street protests, only a few ministers were detained, and critics and perceived opponents were not being summoned daily, as they are now — more than 250 so far. Public TV stations were censored briefly, but social media was in its infancy and the partisan TV stations — closed by the new junta — that backed rival sides did not exist.

This coup, though, is in essence a continuation of the last one. Both were sparked by political conflict surrounding former Prime Minister Thaksin Shinawatra.

Thaksin, a billionaire who made a fortune in the telecommunications industry, shook up the country’s traditional power structure by winning over the majority lower classes with populist policies that brought virtually free health care and electricity to some villages for the first time. His opponents, including powerful businessmen, staunch royalists and much of the upper and middle classes, accused him of corruption, abuse of power and disrespecting the nation’s revered king.

He was deposed in 2006, and two years later was convicted on corruption charges he says were politically motivated. He lives abroad to avoid serving prison time but remained deeply influential in the recently ousted government, which was led by his sister until a court removed her from office earlier this month.

In 2006, few dared march through downtown Bangkok to protest the coup. This time, small groups of demonstrators have come out daily.

On Sunday, a couple of thousand people marched several miles (kilometers) through the heart of the capital, defying a ban on political gatherings. There have been scuffles, and some have been detained, but so far, the army has not used force to disperse protesters — perhaps are aware the situation could rapidly deteriorate.

“I kept quiet for a long time, but I have come out now because I got upset with what’s going on,” said Parthittagon Wanithkungwan, an English teacher. “We have to teach these people a lesson, that such a thing should never be tolerated in a democratic society.”

Although Bangkok is considered an establishment stronghold, it is not entirely so. As demonstrators walked across the city, girls in karaoke bars came out to give a thumbs-up. Vendors smiled and made V signs for victory. Some clapped. Taxis drove past, their occupants leaning out the window to display hastily made “wanted” posters on sheets of white paper bearing the image of Prayuth, the army ruler.

After they gathered at Victory Monument, an obelisk surrounded by a roundabout, protesters and soldiers faced off for an hour on a nearby street.

A hundred grim-faced soldiers with automatic weapons and riot shields lined up in formation across an eight-lane road, refusing to let the demonstrators past. The swelling crowd shouted, “Get out! Get out!” and held signs saying “No Coup!” and “Thailand Needs Elections.”

In the middle stood a police officer. Thailand’s police have been co-opted by the army and have at times taken on a peacemaker role.

“Please, brothers and sisters. Please be reasonable. Please go back home,” the officer said, his voice booming through a loudspeaker.

“These people are of a new generation,” said businessman Chatchai Mongkolsri, who joined the protest after learning about it from a popular Thai blog. “They have learned what democracy is, and they want to protect it.”

If the last decade — or for that matter, the last century — is anything to go by, that will not be easy.

The country has endured a dozen coups since the end of absolute monarchy in 1932, and even when democratic governments were at the helm, there was never any doubt that real power remained with the military.

The army-backed establishment insists its goal is to root out corruption and abuse of power they say emanates from Thaksin, his family and his allies. They opposed new elections, saying Thaksin and his supporters would use corruption and vote-buying to win, but they have been vague about how they intend to improve the system.

Thaksin’s opponents pushed through a new constitution in 2007, but still have not managed to win an election. Controversial judicial rulings removed two pro-Thaksin prime ministers in 2008, one of whom was forced to work out of the VIP lounge of the capital’s old airport because protesters had taken over his office.

The opposition Democrat Party took over, drawing protests that in 2010 led to riots in Bangkok and a military crackdown that left more than 90 people dead.

Thaksin’s sister Yingluck Shinawatra ascended to the premiership in a 2011 vote. Her hold on power began to crumble late last year when her party attempted to pass an amnesty bill that would have erased Thaksin’s two-year prison sentence. Massive protests led her to dissolve Parliament, and protesters also scuttled elections. Yingluck was removed from office this month by a court for transferring an official to another post two years before.

Yingluck’s government had been hamstrung by an inability to use force against protesters, even as they took over government buildings and key parts of Bangkok, for fear of triggering an army intervention. The army had warned the government its leadership would be responsible for any loss of life.

Now that the military is in charge, its policy toward dissent or even questioning is much different. Two Thai reporters who asked Prayuth about elections and appointing a prime minister were summoned by the army a day later for asking “inappropriate” questions in an “aggressive, pushy manner.”

The Red Shirts, the large, grassroots pro-Thaksin group behind the 2010 protests, had vowed to respond if the government was overthrown, but many of its leaders have been detained. A week into the takeover, it is hard to know how many people oppose it, but the initial anger is more palpable than it was eight years ago.

“This is not just about the coup,” said Pimlapat Suksawat, health care worker who marched this weekend. “This is about us. Our society is not what it used to be. It’s changing. The lower class is now the middle class. We are educated, we are no longer poor, but still they look down on us.”

Pimlapat said that “fewer people are smiling this time … And if we don’t come out to stop them, they’ll do it again.”