CHINESE POACHERS Eleven Chinese fishermen arrested by Philippine maritime police on Tuesday for poaching in the West Philippine Sea arrive at the headquarters of the PNP Maritime Special Boat Unit in Honda Bay in Puerto Princesa City on Thursday. They will be charged with violating Philippine wildlife laws. REDEMPTO D. ANDA/INQUIRER SOUTHERN LUZON

MANILA, Philippines—The Department of Foreign Affairs (DFA) on Thursday said it would let justice take its course in the arrest of 11 Chinese fishermen for poaching in Philippine waters on Tuesday, ignoring China’s demand that they be released immediately.

The Philippine National Police also brushed aside China’s demand, saying maritime police were enforcing Philippine laws when they arrested the 11 Chinese fishermen at Hasa-Hasa Shoal (Half Moon Shoal) in the West Philippine Sea.

“Our assertion is that it’s ours. That is within Philippine territory that’s why we have a dispute [with China],” Purisima told a news conference.

As to Beijing’s statement that the seizure of the boat and its crew was a provocative action, Purisima said: “That’s their statement. We are just doing our job.”

“We should let the judicial process take its course in this case,” DFA spokesman Charles Jose said in a statement sent to the Inquirer.

The line was a brief addendum to the DFA’s statement released on Wednesday night, asserting that the arrest of the Chinese fishermen by Philippine maritime police was an exercise of the country’s sovereignty over its 370-kilometer exclusive economic zone (EEZ) in the West Philippine Sea.

The DFA also said the case would be dealt with “in a just, humane and expeditious manner.”

The PNP Maritime Group’s Special Boat Unit seized a Chinese fishing boat and its 11-member crew near Hasa-Hasa Shoal in the Spratly archipelago off Palawan province after it found the vessel carrying around 400 protected sea turtles.

Five Filipino fishermen were also arrested in the area around the same time for taking 70 sea turtles from the sea, which is prohibited by the Philippine Wildlife Act.

Communications Secretary Herminio Coloma said on Thursday that the PNP Maritime Group’s action was “in accordance with its duty to enforce environmental protection and wildlife conservation laws.”

And in seizing the Chinese boat and its crew, the police was “upholding Philippine sovereign rights over our exclusive economic zone,” Coloma said.

The Philippines and China are locked in a territorial dispute in the West Philippine Sea, part of the South China Sea within Manila’s EEZ.

Manila has taken the dispute to the United Nations for arbitration, angering China and chilling relations between the two countries.

Besides the Philippines and China, Brunei, Malaysia, Vietnam and Taiwan also claim parts of the South China Sea.

After the seizure of the fishing boat on Tuesday, China, which claims nearly all of the 3.5-million-square-kilometer South China Sea, demanded that the Philippines release the 11

On Thursday, the Chinese Embassy in Manila reiterated Beijing’s demand that the fishermen be released and accused Philippine authorities of taking a “premeditated” act meant to stir tensions in the disputed West Philippine Sea.

In a statement, the embassy said it had “lodged solemn representations” with the Philippines and asserted China’s “indisputable sovereignty” over Nansha (the Chinese name for the Spratly islands) where Ban Yue Reef (Hasa-Hasa Shoal) is located.

“This provocative action is premeditated in an attempt to create tensions, and severely violates China’s sovereignty and maritime rights,” the embassy said.

“The Chinese side strongly urges the Philippine side to release the boat and its crew immediately, and guarantee the crew’s safety and their property,” it said.

The embassy reiterated the Chinese foreign ministry’s warning on Wednesday for the Philippines “not to take provocative actions so as to avoid further damage to the bilateral relations” between the two countries.

Purisima said the PNP had referred the incident to the Committee on Illegal Entrants, composed of representatives from the DFA, Department of Justice (DOJ), Bureau of Immigration and other governmental agencies.

“Let the investigation take its course,” Purisima said, adding that the PNP would leave the filing of charges against the Chinese fishermen to the committee.

Justice Secretary Leila de Lima declined to comment on the incident, saying the DFA was the agency that should speak about the case to avoid further tensions with China.

She indicated, however, that justice department prosecutors were awaiting recommendations from the DFA.

Interior Secretary Mar Roxas said the arrest of the fishermen was not about the Philippines’ territorial dispute with China, but about the protection of Philippine wildlife.

“The Philippines, through the agency of the PNP Maritime Group, is simply exercising its duty to protect our shoreline and our natural resource,” Roxas told reporters.

“The PNP maritime patrol is just doing its job,” he said.

Not sure they’re Chinese

Despite the PNP’s earlier statement that the fishermen were Chinese nationals, Chief Supt. Noel Lazarus Vargas, PNP Maritime Group director, clarified on Thursday that the police had yet to determine their nationality.

Vargas acknowledged that the vessel, identified by China as the 15-ton Qionggionghai 09063, flew a Chinese flag.

“But we cannot assume that all its passengers were Chinese just because it had a Chinese flag,” Vargas said.

He noted that maritime police recently seized a fishing boat in the West Philippine Sea that flew a Chinese flag, but its six crew members were from Malaysia, Indonesia and Vietnam.

Vargas also denied Chinese media reports that the maritime police fired shots in the air before they boarded the fishing boat.

“That is their statement. I do not know where they got their information. As far as the PNP is concerned, we did not fire shots,” Vargas said.

Vargas said the arrest of the Chinese fishermen was the result of a five-day operation that maritime police carried out on a tip from local fishermen.

He said local fishermen reported the departure of local boats for Hasa-Hasa Shoal, which lies 100 km from Rizal town in Palawan.

The maritime police, he said, arrived at the site on Tuesday and saw small boats transferring turtles to a foreign vessel.

Vargas said the small boats fled, but one was caught with its five Filipino crew members transferring turtles to the foreign vessel.

The foreign vessel was the Qionggionghai 09063.

Vargas said the 25- to 30-meter-long vessel anchored in the area when it had rudder trouble.

He said the vessel was towed to Liminangkong Port in Balabac on Wednesday.

“The vessel was actually close to sinking that’s why it had to be repaired in Liminangkong where its crew were off-loaded,” he said. 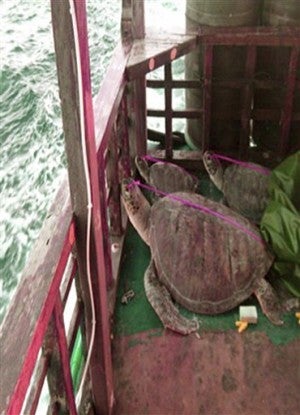 This photo released by the Philippine National Police Maritime Group shows live sea turtles that were seized by the Maritime Group from a foreign vessel flying a Chinese flag cruising in the waters off the South China Sea Tuesday May 6, 2014. AP PHOTO/THE PHILIPPINE NATIONAL POLICE MARITIME GROUP

“Fortunately, the foreign vessel had problems with its rudder. Otherwise, our boat cannot catch up with it because our boat is really slow compared to the foreign fishing vessel,” Purisima said.

The Chinese fishermen arrived in Puerto Princesa City, Palawan, on Thursday and were taken to PNP Maritime Group headquarters on Honda Bay where they were processed in preparation for the filing of charges against them in a local court.

Local maritime officials declined to be interviewed about the fishermen’s arrest.

Brig. Gen. Roy Deveraturda, chief of the military’s Western Command, said the Chinese fishermen’s arrest was “a case of a regular police operation.”

Lawyer Adel Villena, head of the Palawan Council for Sustainable Development’s legal department, said charges would be filed against the Chinese fishermen after the police had submitted the legal information.

“We are just awaiting the statements of the apprehending officers [and we will go] ahead with the filing of the case,” Villena said.

Meanwhile, the environmental organization Greenpeace urged the Philippine government and the international community to jointly undertake measures to protect marine biodiversity in the disputed waters despite unsettled political issues.

“We are the center of global marine biodiversity but we are fast becoming the center of marine bioadversity,” said Vince Cinches, oceans campaigner for Greenpeace Southeast Asia.

“It’s not just the Philippines that is responsible for protecting the oceans, but other countries as well. They should work together to protect the oceans instead of exploiting it,” he said.—With reports from Leila B. Salaverria and Jerome C. Aning in Manila; and Redempto D. Anda, Inquirer Southern Luzon