Edca a deterrent to war—Bautista 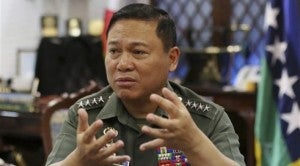 The Enhanced Defense Cooperation Agreement (Edca) is a “creative way” for the Philippine government to improve deterrence and face challenges to national security with the help of an ally, the United States, according to Armed Forces of the Philippines Chief of Staff Gen. Emmanuel Bautista.

“We want to avoid conflict, that is why we need to establish a credible deterrence. We don’t have the wherewithal to do that and so what is the practical solution for us? It is to leverage on our alliance. We only have one treaty ally, that is the US,” Bautista told the Inquirer in an interview at the military’s headquarters on Saturday.

“There are no [US military] bases here, so we have to find creative ways to allow us to undertake (Mutual Defense Treaty)-related activities but would still affirm the provisions of the Constitution. That is the Edca,” Bautista said.

The Edca could have been beneficial to the Philippines during the March 29 rotation of troops and resupply mission of the military to Ayungin Shoal (Second Thomas Shoal) in the West Philippine Sea, which the China Coast Guard tried to block, had the security pact been operational at that time.

Journalists saw US planes flying over the small government fisheries vessel used by the Philippine Navy for the crucial mission to the BRP Sierra Madre, the rusting naval ship manned by a small Marine garrison on the shoal.

Without confirming or denying help from the United States, Bautista said US planes usually seen in Philippine territory come from their base in Okinawa, Japan.

“When they get here, they can go around and fly for only a few minutes, then they should go back [to their base]. If they could land in Palawan and refuel there, can you imagine how much longer they can stay around? That is possible under the Edca,” Bautista said.

With the Edca, Bautista said there would be more joint activities between the Philippine and US militaries to “demonstrate the alliance is alive and credible.”

The Edca was hammered out for eight months by Filipino and American negotiators, and signed a few hours before US President Barack Obama arrived in Manila for a state visit on April 28.

Criticisms of the agreement range from its supposed unconstitutionality to being lopsided in favor of the Americans to surrendering the country’s sovereignty for allowing the United States to put up military bases in the guise of sharing space in select AFP camps.

Bautista, who is retiring on July 20, stands by the agreement, saying it should be understood in the context of the Mutual Defense Treaty (MDT) between the Philippines and the United States.

“Our biggest benefit [from the Edca] is its strategic feature. The Edca is not a stand-alone agreement. It is [meant] to operationalize the MDT, which serves as a deterrence to any armed aggression,” Bautista said.

The agreement, Bautista said, would put the Americans “in a better position to defend us.”

“We want to increase the tempo, we want more exercises,” he said.

The Edca is taken within Article 2 of the MDT, which states that the Philippines and the United States “separately and jointly by self-help and mutual aid will maintain and develop their individual and collective capacity to resist armed attack.”

Signed in 1951, the MDT is the bedrock of the military alliance between the two countries. The agreement binds them to a commitment to help each other when one comes under an external armed attack.

The treaty is a public and formal declaration of the two countries’ “unity and their common determination to defend themselves against external armed attack, so that no potential aggressor can be under the illusion that either of them stands alone in the Pacific area.”

Obama himself quoted this paragraph from the MDT when he addressed Filipino and American troops on April 29, declaring that the United States’ commitment to defend the Philippines was “ironclad.”

Bautista said the Edca was the fourth security agreement signed by the Philippines and the United States that facilitates the implementation of the MDT.

Before the Edca, there were the Visiting Forces Agreement (VFA), the Mutual Logistics Support Agreement (MLSA) and the Military Assistance Agreement (MAA).

The VFA governs the status of US troops in the Philippines as well as deals with the two countries’ military cooperation against nontraditional security threats, such as terrorism and environmental disasters.

The MLSA provides for the logistical cooperation between the two militaries as they intensify their cooperation and ability to work together.

The 1947 MAA formalized the US commitment to assist in the development of the AFP. It also established the Joint US Military Assistance Group.

He said the agreement permits the US military to rotate troops and equipment in selected AFP bases for more frequent joint military activities, including dealing with traditional and nontraditional threats such as climate change.

Bautista said the US response to Supertyphoon “Yolanda” (international name: Haiyan) in November last year could have been faster had there been US planes in AFP bases.

Although it has been signed, the Edca will be implemented only after the Mutual Defense Board-Security Engagement Board (MDB-SEB) approves the activities proposed under the new agreement.

Bautista said the MDB-SEB, comprised of top Philippine and US defense and military officials, would meet in September or October.

He will have retired by then.

How students can avail of Heart Evangelista’s free tablets