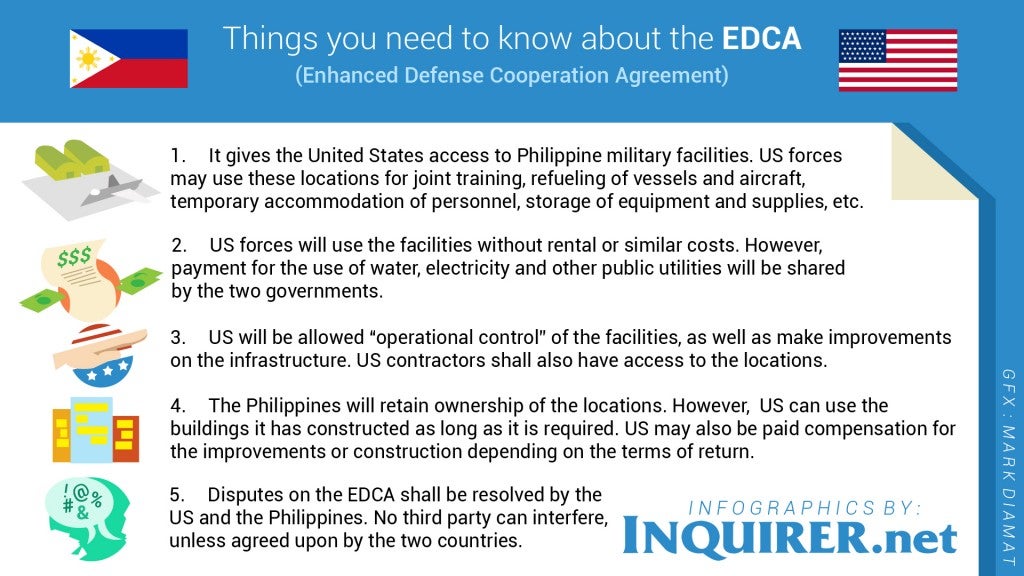 MANILA, Philippines—Is it a treaty or an agreement? Or, none of the above?

The increasingly contentious Enhanced Defense Cooperation Agreement (Edca) does not need Senate ratification because it is not a treaty but an agreement to improve Philippine-US security cooperation.

This was stressed Friday by Defense Undersecretary Pio Lorenzo Batino, the Philippines’ chief negotiator, who said the Edca “continues policies set forth by the Mutual Defense Treaty (MDT).”

Batino pointed out that Article 2 of the MDT “obliges both parties to separately and jointly, by self-help and mutual aid, maintain and develop their individual and collective capacity to resist armed attack.”

“Edca is just the enhancement of that capacity as joint exercises are envisioned to do,” Batino said. “This policy was reaffirmed in the Visiting Forces Agreement (VFA) … The Edca just further implements the policies already agreed [upon].”

“Thus, the Edca does not need ratification,” he said.

Batino said an international agreement becomes a treaty if it is “political in nature, permanent and policy changing.”

“The Edca is not a political agreement. It is a defense agreement. It is not permanent because the Edca has a duration of just 10 years. And it is the position of the panel that there is no new policy being established here through Edca,” Batino said.

The Philippine negotiating panel is to brief the House of Representatives on the issue on May 14, Batino said.

“We are ready to present the legal basis for the Edca, its constitutionality and the implementing nature of previously agreed treaties with the United States, including the MDT and the VFA,” he said.

Batino said the Edca sets the rules for “deeper and stronger defense cooperation” with the United States.

Details of the activities under the Edca, including the number of US personnel to be deployed in the Philippines and the military hardware that they will bring, will be determined by the Mutual Defense Board and the Security Engagement Board.

The Philippine panel reiterated that no permanent US bases would be established in the country.

“One concern expressed by some people is that there might be a possibility that there will be the establishment of US military bases and I think the agreement dispels that,” said panel member Ambassador J. Eduardo Malaya.

“The preamble specifically states the understanding of the United States not to establish permanent US bases.”

Malaya reiterated that there were three “defining features on what constitutes” US bases when they were at Subic Bay Naval Base and at Clark Air Base. These were extraterritoriality, where US laws prevailed, exclusive use of the bases and ownership of the facilities.

Malaya said that under the Edca, Philippine laws apply even in areas in selected military camps of the Armed Forces of the Philippines, there will be joint use of the areas and the facilities to be constructed by the United States will eventually be turned over to the AFP.

The Edca also provides that AFP commanders can have access to areas used by the US military.

One of the areas being considered for joint use is Fort Magsaysay in Nueva Ecija province, Batino said.

He said Fort Magsaysay was large enough and had been traditionally used for the Balikatan exercises.

Batino clarified that the development of Subic was primarily for the use of the AFP where it could “strategically locate” Air Force jets and Navy equipment.

“We need a home urgently. We are procuring jet fighters and other aircraft that would need suitable and strategic homes,” he said.

Up to five Philippine military bases will be made available for US forces to rotate aircraft, ships, equipment and troops, Batino said.

The accord also covers storage of equipment for maritime security and humanitarian assistance.

“Right now, the discussions would be ranging from three to five AFP bases,” Batino said. “That’s not final.”

The United States is also considering whether to seek access to four civil airports—Palawan, Cebu, General Santos and Laoag—as well as the Batanes airfield for refueling and emergency servicing, the sources said. There are also nearby bases in Cebu and Palawan provinces.

Territorial disputes have made the South China Sea (West Philippine Sea), believed to have rich deposits of oil and gas, a potential flash point for the region.

China has become increasingly assertive in the disputed waters, seizing control of Scarborough Shoal (Panatag Shoal) in 2012 and blockading Second Thomas Shoal (Ayungin Shoal) where a Philippine Navy transport ship was deliberately run aground in 1999 to establish a presence.—With a report from AFP