MANILA, Philippines—As the Chief of Staff of the Armed Forces of the Philippines formally opened the 30th Balikatan exercises, government officials used the ceremony to defend the much criticized Enhanced Defense Cooperation Agreement.

In front of Filipino, American and Australian troops, AFP Chief of Staff General Emmanuel Bautista announced and opened Balikatan 2014 with the issues of maritime security and maritime domain awareness the focus of the yearly exercise. 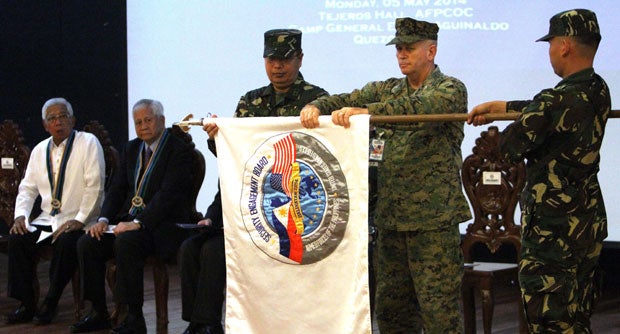 “Through the Balikatan exercises, the United States and the Philippines have learnt from each other in interoperability, peace and security in the Asia Pacific,” Bautista said at the Tejeros Hall at Camp Aguinaldo Monday.

Bautista said that the new instalment of the Balikatan, which would have the Australian Defense Force for the first time, would develop military capabilities of the parties and “demonstrate Philippine and US relationships in maritime security.”

“Balikatan would strengthen our capability to manage such threats, and disasters,” said Bautista who referred to natural calamities as non-traditional threats and which showed the strong alliance of the two nations. “Both militaries can work together in the spirit of bayanihan in contingencies.”

“We fly different flags today but we share the same common goal of peace and security and prosperity in the Southeast Asia,” Goldberg said. “While we look to the past and honor the heroes who fought for our freedom, we should use the lessons they thought us to move the alliance to the 21st century.”

“Shoulder to shoulder ready to defend when needed.”

“They worked together to free the Philippines from foreign oppressors, amazingly, 70 years later, the same of working together was manifested when Yolanda struck in the same place where President Sergio Osmeña and General Douglas MacArthur landed in 1944 in Palo, Leyte.”

Amid the constant wave of criticisms from the militant groups, officials in the higher offices of the military, and foreign affairs aired their views and defended the EDCA.

“Signing of the EDCA would expand the rotational presence of our American allies in the Philippines and the visit of President Barack Obama highlighted the cooperation among our forces outside the Balikatan,” Magnaye said.

Foreign Affairs Secretary Albert del Rosario, the guest of honor during the opening ceremonies, said EDCA is a “cornerstone for peace and stability in the Asia Pacific.”

“EDCA elevates to a higher plane our defense agreement and provide new momentum to our partnership,” del Rosario said. “This increases a regional importance in our alliance.”

Del Rosario added that EDCA would improve the maritime security, maritime domain awareness and disaster response of the military.

Gazmin added that EDCA is meant solely to improve the Philippine-US military cooperation.

“This Balikatan has been held after we have forged the EDCA,” Gazmin said. “We as allies both recognize it would serve as enabler, making it effective for us to conduct combined exercises.”

Goldberg, who co-signed with Gazmin the document, said EDCA would be helpful to Filipinos in “maintaining the peace.”

He said EDCA would not only enhance the Philippine’s military capabilities but would bolster the presence of US troops in humanitarian and relief operations.

Read Next
Visa-free entry to Japan for Filipinos still being reviewed
EDITORS' PICK
Smart poised to turn PH into ‘Smart 5G country’ with nationwide rollout
New Vatican ambassador to PH named
We don’t want gov’t to fail, because it’s all of us who will suffer and die — Robredo
Duterte keeps Metro Manila under GCQ for entire October
Get 80% OFF Ignite 2020 Cyber Tickets starting 28 September
Water remains our saving grace right now
MOST READ
Duterte keeps Metro Manila under GCQ for entire October
Fernandez: Velasco camp ‘betrayal’ pushes call to retain Cayetano as Speaker
Palace: Some cities in Metro Manila eligible for MGCQ
Mayor Treñas tells Locsin: Iloilo City is much better than what you think
Don't miss out on the latest news and information.